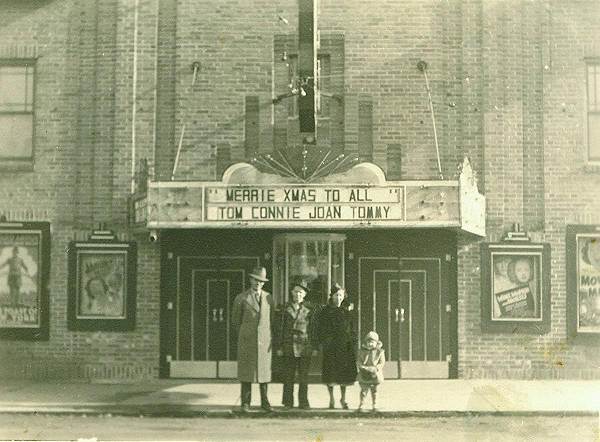 The Ozark Theater was the second theater in Eldon. It was opened in 1930 in competition to the nearby Electric Theater. However, it was eventually taken over by Tom and Connie Edwards, owners of the Electric Theater. It was destroyed by fire in February 1949. A new Ozark Theatre was built on the site, opening in September 1949. It was later owned by the Edwards and Plumlee Theatres chain (which may have been co-owned by Tom and Connie Edwards or their descendants)

The Ozark Theater was located on N. Maple Street near E. North Street. I am not sure when the Ozark Theater closed, but believe it lasted into the 1970’s or 1980’s. The building has been demolished, and a bank building is now located where it stood.

The Ozaark Theatre goes back to 1930 when it opened.

The Ozark was probably the unnamed theater in this brief item in the May 29, 1930, issue of The Sedalia Democrat:

J. Thomas Ghosen, of 1022 West Sixteenth street, has contracted to construct a $15,000 theatre at Eldon, Mo., and began work Monday. The plans and specifications were drawn by Leroy H. Parrish, of Jefferson City, Mo.“Ghosen operated several theaters in central Missouri from the 1920s into the 1950s, some independently and some in partnership with the Commonwealth circuit.

ELDON, MO. – The new Ozark Theatre built here by Tom Edwards of the Edwards & Plumlee circuit to replace the house destroyed by fire last February is expected to be ready for opening about September 1. Constructed of concrete and brick, the new Ozark is virtually fireproof. A cry room will be one of the features of the house. The personal property of Edwards and his wife, the new Ozark will be managed by Bill Smith.

Theater was not on the corner, but was somewhere north of the senior housing.