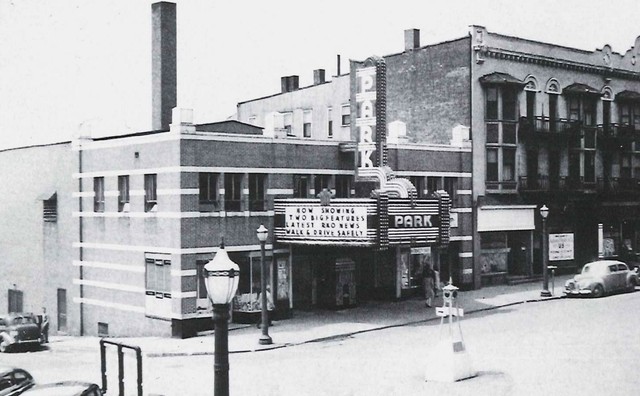 The Park Theater closed its doors to the public today for an indefinite period. Skirball Brothers, Inc., owners and operators of the Park Theater, announced: “Due to the fact that management cannot meet the demands of the moving picture machine operators' union, the theater will be closed until further notice.” It was explained that the “demands” centered around wages for the four-day work week which was started at the theater recently. A few weeks ago the Park management announced the theater would close Tuesday, Wednesday and Thursday of each week. Skirball spokesmen said no plans have been made for using the theater in the near future.

Boxoffice of February 26, 1938, said that A.G. Constant was building a 1,350-seat theater on Park Avenue in Mansfield. The architect was Victor A. Rigaumont.

Though it didn’t give the opening date, Boxoffice of October 1, 1938, said that more than 2,500 people had turned out for the opening of the Park Theatre, and that all of the 1,300 seats were filled for the first show. Presumably, the opening was in September.

Two levels of windows have been punched into the side walls of the Park Theatre’s former auditorium, so the space has most likely been filled in with two floors of offices.

The only photo of the building I can find is this close shot of the area where the marquee once would have been.

Yes, the Park is now part of the Richland County prosecutor’s office. I did grand jury duty there two years ago and had no idea it had once been a theatre. It has been cut up into several floors and each floor is divided into many individual offices. You can tell from the exterior that it had once been a theatre, but wouldn’t have the first clue if you saw the interior.

as well as the photo section