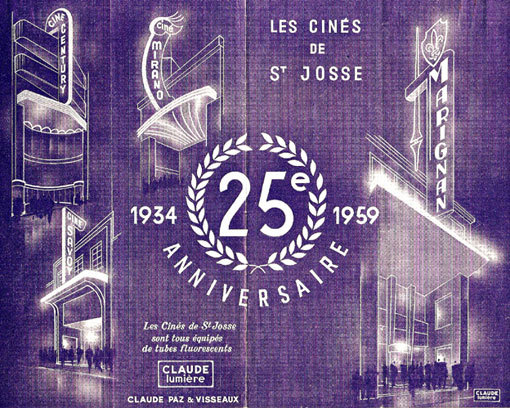 Located just north-west of the main city centre. The Marignan Cinema was built on the place of a former entertainment establishment. Although architect R. Ajoux (who has also designed the Mirano Cinema and Century Cinema on the same road) had made drawings and plans for a cinema named ‘Miramar’, it was eventually built by architects G. Rousseau and Arthur Meuleman in 1958, and opened in 1959.

It was then used by INSAS (Institut National SupÃ©rieur des Arts du Spectacle) until 1991. After some reconstructons, the building has been in use as a conference centre since 1995. The original auditorium has been restored, and the projection booth is in it’s original state as well. In 2018 it became a cultural centre.

The original sign of the Marignan Cinema, photographed in September 2008:
View link