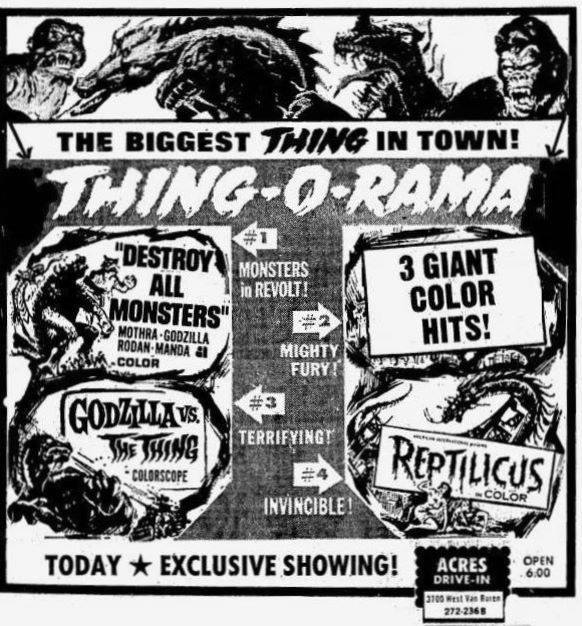 The Twin Drive-In was opened in 1951. It became the Acres Drive-In from April 11, 1952 and on July 18, 1952 the second screen opened as the Peso Drive-In. They had a combined car capacity for 800 and were operated by the Harry L. Nace Theatres chain. In 1955 only the ‘North Screen’ (Peso Drive-In) with a capacity for 400 cars was operating, screening Spanish language movies, and it was still open in 1957. On September 1, 1960 the screen was blown down. The drive-in was closed until 1962 when it reopened with a new screen. It was still open in 1975. Now a trailer park.

Was mentioned in the documentary "Drive-In Movie Memories" in 2001.

Open air theatres are generally walk-ins. They probably were accommodating walk-in patronage as well as people inside vehicles.

I too watched movies from the roof of the home I grew up in. Phoenix was a great place to live in the 70’s. My friends and I also would sneak into Acres Drive-in through a opening we made in the fence. We would sit next to cars parked for the movie and enjoyed the show.I remember watching The Posieden Adventure Whiteline Fever just to name a few. During the summer break we would actually climb up into the movie screen to the top and catch pigeons. Very dangerous it had to be over 100 feet high. But when your a kid it was an adventure. I also remembering eating popcorn the snack bar would put out after the shows. We had a blast.. Good Times….Larry AKA Bighead in 1974

The Acres/Peso Drive-ins were on that industrial park. I believe the screens for both were in the middle, back to back. The Reynolds Aluminum plant was across the street.

April 26, 1952 Boxoffice: “PHOENIX – The Twin Screen Drive-In, which closed early last January, has been reopened by Fred Crockett and Harry L. Nace as the Acres of Fun. Only one screen is being utilized, reducing the capacity of the airer, formerly a McCormack-Nace enterprise, to around 625 cars. The duel screen outdoorer was the largest drive-in in the state under its original operation. The current manager is Otto Silvester.”

Opened with 2 colour cartoons(not named). “Red skies of Montana” and “Cave of outlaws”.

Motion Picture Herald, Aug. 2, 1952: “The Peso drive-in is the new name of the re-opened North screen of the former Twin Open Air drive-in, operated by the Harry L. Nace Theatres. South screen has been operating for some time under the name of Acres-Of-Fun.”

So, putting the information in all these comments together, the operation was opened by McCormick-Nace Enterprises sometime in 1951, probably late in the year, as either the Twin Drive-In, the Twin Open Air Drive-In, or the Twin Screen Drive-In, which was closed in early January, 1952. Then one screen was reopened April 11, 1952 by Crockett and Nace as either the Acres Drive-In or the Acres of Fun Drive-In, and then the second screen was reopened as the Peso Drive-In (or perhaps El Peso Drive-In) on July 18, 1952.