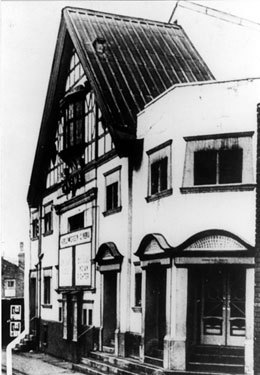 The Tudor Cinema opened on Easter Monday 5th April 1920 as the Heeley Green Picture House. It had an attractive half-timbered gable front, that had a leaded glass window in the centre. Seating in the auditorium was provided in stalls and circle levels.

From 1926 variety acts were perfoming on the stage to supplement the film programme. In 1927 a safety curtain was installed and in 1928 the stage was enlarged. It was used exclusivley as a 1,000 seat capacity, live theatre from April 1929 staging variety & revue shows and known as the Heeley Green Theatre. The stage was 21 feet deep, the proscenium 32 feet wide and there were seven dressing rooms. Films returned briefly in the Summer of 1930 whilst the dressing rooms were being modernised.

In 1938, the proscenium was altered to 24 feet wide and other alterations were made and it became a full time cinema again, re-opening on 9th May 1938. The Heeley Green Picture House was closed on 7th March 1959.

After closing it became a bingo hall. The building then became Potters Snooker Club. An overnight fire on 1st & 2nd June 2004, thought to be arson, badly damaged the building, and it was thought to be beyond repair.