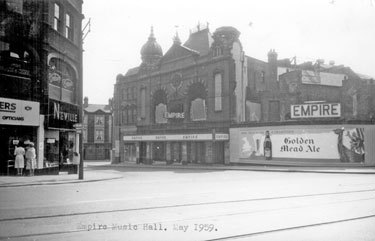 The Sheffield Empire Palace Theatre Of Varieties opened on Monday 4th November 1895. It was located in Union Street with its frontage taking up most of Charles Street. Built for and run by the large Moss Empires chain of theatres throughout its existence, only dropping the ‘Palace’ part of its name in later years and known simply as the Sheffield Empire.

It was Sheffield’s big variety house, designed by the famous theatre architect Frank Matcham with seating for 2,500. Its frontage was of brick and stone with the name ‘EMPIRE PALACE’ adorning a top pediment. Two arched alcoves with Jacobean spindles with inset windows flanked the central opening. The Box Office ran along the left hand side of the theatre entrance doors. Inside the auditorium, looking from the stage the roof rose 68 feet from orchestra pit to ceiling. The ceiling was in fibrous plaster decorated with figures representing music and art. In the centre was a sliding roof which could be opened in hot weather to let in fresh air. There was a horse shoe shaped circle with fibrous plaster frontage with a similar gallery above this. On either side of the circle were two boxes. The proscenium arch was square with flat fronted panels on the side with an angled edge with ornamental relief. Internal decorations were carried out by De Jong and paintings were by artist B. Sicard.

As early as 1896 it was showing ‘animated pictures’ in its variety programmes using a ‘Variety Lumiere Cinematographe’. The artists who appeared at the Empire Theatre reads like a ‘Who’s Who’ of music hall and variety stars. From Marie Lloyd, Vesta Tilley, Florrie Ford, Ada Reeve, Harry Lauder, George Formby, Grace Fields, Dorothy Ward, Shaun Glenville, Jack Buchanan, Anna Pavlova, Ivor Novello to Hylda Baker, Jimmy Clitheroe, Ken Dodd, Shirley Bassey, Tommy Steele, Harry Secombe - the list goes on and on. The Emprire Theatre was closed for six weeks in June 1927 for redecoration and again in July 1933, it was closed for further redecoration and some alterations, which included the installation of a new bio-box in the roof.

A serious fire burnt out the stage house on 3rd August 1942, with only the safety curtain stopping the fire from reaching the rest of the theatre. Due to war-time restrictions, the Empire Theatre was closed for over a year, re-opening on 6th September 1943. Also during the war the theatre lost one of its two turrets at the front of the facade along with buildings on either corners. In 1953 a very young Julie Andrews appeared at the Empire in a variety show with Max Wall. The 1950’s also saw a number of big American Musicals play the Empire - “The King And I”, “Carousel”, “South Pacific”, “Brigadoon”, “Guys and Dolls”, “Annie Get Your Gun” - all on their National tours following long seasons in the West End of London. Pantomimes were also very popular at the Empire Theatre, its last being Lauri London and Edna Savage in “Babes In The Wood” complete with Eugene’s Flying Ballet, when the artists flew out over the stalls to the circle edge. I know because I saw this show.

With the impact of television, Moss Empires decided to close the Empire Theatre and in 1959 it was sold to an Edinburgh Real Estate Company, closing on Saturday 2nd May with Albert Modley in a variety show sponsered by the Smedleys Food Company. It was demolished two months later in the July and replaced with shops, which still stand on the Empire Theatre site today.