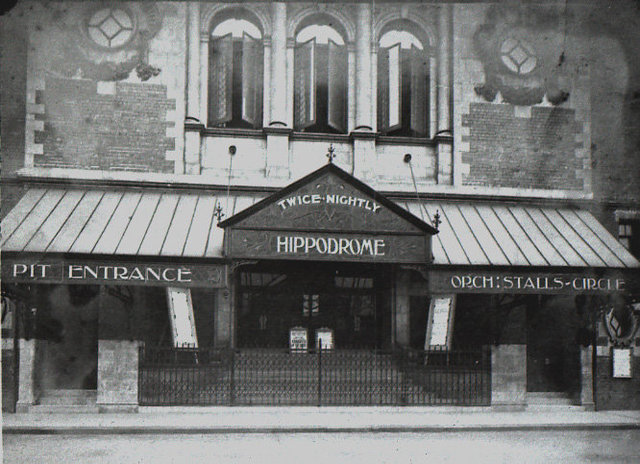 The Rotherham Hippodrome Theatre opened on 3rd August 1908 as a variety theatre, with animated pictures as part of the programme. Built to the designs of Chadwick & Watson of Leeds, the brick building had an Italian Renaissance facade topped by two large domes. It was built in a record four months, with building starting on 24th March 1908.

Entrance to the lower foyer was up a flight of terrazzo mosaic steps, with the foyer floor in marble mosaic with an ornamental centre of Roman mosaic and the rest terrazzo. Two flights of stairs led to the mezzanine corridors which gave access to the front tiers of the circle, boxes and stalls. A further staircase led to an upper foyer with access to the rest of the circle. The pit had a separate entrance in Henry Street and the gallery entrance was down the side in Nottingham Street. The auditorium, with seating for 2,500 was in Georgian style with a delicate colour scheme. George Formby and Gracie Fields are just two of the music hall stars to appear on the Hippodrome Theatre’s stage and William Booth (founder of the Salvation Army) held a rally there in 1911.

The theatre closed for the summer recess on 2nd July 1932 and did not re-open until 17th October 1932. It reopened as a cinema with a redecorated auditorium and an unusual screen setting in the form of an opening fan. The opening programme was Maurice Chevalier in “Playboy of Paris” and Clara Bow in “No Limit” and the seating capacity had been reduced to 1,800.

CinemaScope was installed in 1955, reopening on 5th November 1955 with Victor Mature and John Lund in “Valley Of Fury”. In 1959, Rotherham Council announced they had purchased the Hippodrome Cinema for in excess of 20,000 GB Pounds, to build a new civic centre. The Hippodrome Cinema closed on 19th December 1959 with a double-bill ‘X’ certificate programme; Claus Holm in “When The Devil Came”(Nachts, wenn der Teufel Kam) & Marla English in “Runaway Daughters” and was demolished in 1960.

This webpage provides additional historical detail about this theatre.