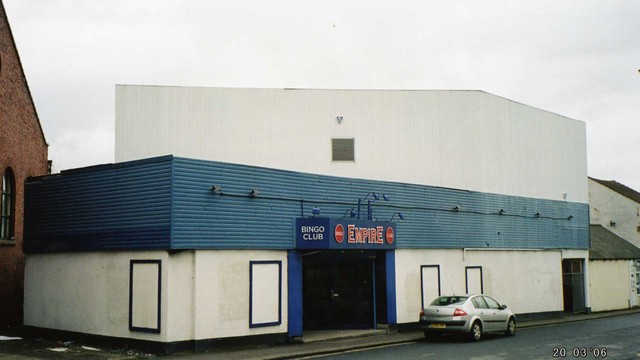 Opened as the Olympia Roller Skating Rink on 15th January 1910. Built on Swinton Road, just along from Mexborough’s High Street, the building replaced a former tent like structure. By March 1911 the skating rink had closed and the building was converted into a cinema, reopening as the Empire Picture Palace on 19th June 1911. It had an ornamental auditorium made up of stalls and circle with stage facilities. Proprietors were the Empire Palace (Mexborough) Ltd. The Empire closed for installation of sound, a new projection room and re-seating on 20th September 1929.

In January 1955 CinemaScope was installed with Richard Burton in “The Robe” being the first film shown in the new format, complete with stereophonic sound. In June 1955 the Empire Cinema was taken over by the Leeds based Star Group of Cinemas, who closed it on 18th June 1955 for complete modernisation including new seats, carpets and drapes and a much improved CinemaScope screen was fitted. The Empire Cinema re-opened on 27th June 1955 with Alan Ladd in “Drumbeat”.

With the demise of the Mexborough Hippodrome Theatre in 1937, the Mexborough Operatic Society moved to the Empire Cinema to present their yearly production on the Empire’s stage. On 19th June 1961, Star Bingo was introduced on Wednesday evenings, with Thursdays added later due to its popularity. It also opened as a Night Club called the Playmate Club on Mondays, the first night being 25th June 1962, when the cabaret was the popular recording artist Eden Kane. Films were shown at this time on Sundays, Tuesdays, Fridays & Saturdays. However, Mexborough was just not ready for a night club and the Playmate was short lived, as on 26th July 1962 the Empire Cinema showed its last film “Caltiki, the Immortal Monster”.

It reopened the following day as the Empire Casino - on full time bingo. The operatic society, now known as The South Yorkshire Musical Comedy Society, were informed that they would have to find a new venue for their 1963 production, even though the regular bingo patrons said they were quite happy to give up the Empire for a week each year for their show week. Star decided it would be too much upheaval for one week each year to move all the bingo equipment and refused the group to play there, so their production there the previous March of “The Desert Song” was the last stage show at the Empire. The group moved to the Goldthorpe Welfare Hall (renamed the Dearne Playhouse in 2006) and this year (2008) will present their 45th production there of “Brigadoon”. Following a fire at the stage end of the building in the late-1960’s, the rear end of the building was rebuilt, but without any stage facilities. Star, EMI, Coral and Gala have run the Empire as a bingo hall (without the Empire name), but now an independent company run the hall and the Empire name has been re-instated.

The Bingo club was closed in March 2020 due to the Covid-19 pandemic. On 19th May 2021 the police found a cannabis factory operating in the building.