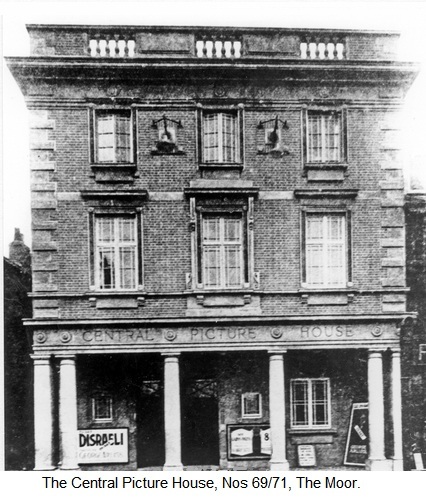 The Central Picture House was built on The Moor, one of Sheffield’s main shopping thoroughfares, and opened on 30th January 1922. The frontage of the cinema was rather restricted but it opened out further back and the seating capacity was for 1,600; 1,000 in the stalls and 600 in the circle.

Built on the site of the former Whitmarsh Watson Brewery, it was designed in Neo-Grecian style by J. Mansel Jenkinson. The lower facade had a colonnade in artificial stone with concrete columns covered with marble terrazzo. The floors to the cinema were in white marble terrazzo. The foyer was quite narrow but there was a waiting hall for 500 patrons plus a smoking room and lounge on the ground floor. A cafe-restaurant was provided on the second floor and in the basement there was a large billiards room with sixteen tables.

The auditorium had a domed ceiling and decorations were in French grey and dove to pick out the fibrous plaster enrichments. The screen tabs were in dark blue velvet picked out with silver metallic lace.

In 1926 a 3Manual cinema organ was installed, built by Vincent & Sewell of Sunderland. In 1929 the Central took over the Sunday Services which had been previously held in the chapel at the Albert Hall but these were discontinued in 1935.

The frontage was much improved in 1935 in an effort to provide a wider foyer and in 1937, the seating capacity was given as 1,539. In January 1939, Anna Neagle and her husband Herbert Wilcox both made a personal appearance at the Central to promote their film “Sixty Glorius Years”. At the outbreak of the Second World War, the Central Picture House decided to open on Sundays, restricted to those serving in the forces. The first and only Sunday opening was on 7th December 1940 as during the night of the 12th/13th December the cinema was hit by an incendiary bomb during the Sheffield blitz and was seriously damaged and never reopened as a cinema again. The last films to be shown were Shirley Temple in “The Bluebird” and Sid Field in “That’s The Ticket”.

After the war, the foyer area was used for several years by one of the department stores which had also been bombed. The cinema was not beyond repair and could have been rebuilt after the war but due to conditions imposed by the local planning committee who were intent on complete redevelopment of The Moor, the remains of the Central Picture House were finally demolished in 1961.