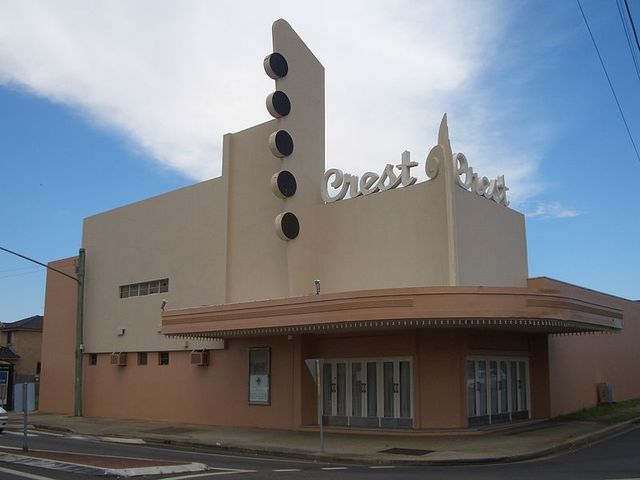 Located in the Sydney suburb of Granville, near Granville South. The Crest Theatre opened at Easter, 27th March 1948 with “The Swordsman” and “Dangerous Years”. It was designed by the architectural firm Cowper, Murphy and Associates. It had an imposing corner entrance, that had a slender fin-tower feature. Inside the auditorium, the seating was on a stadium plan, with a raised stepped section at the rear, instead of an overhanging balcony. Operated by the Hoyts Theatres chain for its entire cinematic life. In it last years, it was only open one day a week, on a Saturday. The final closing date was Saturday, 24th August 1963.

After closing as a cinema, it was used as a ballroom and bingo hall. The building is currently used as a public hall.

It is Listed on the National Register of Historic Buildings.

Another photo of the Crest can be found on this page.

Back in the late 1960’s the Crest was a regular venue for dances which featured local and national bands.
Who remembers the names of some of the bands that played there?