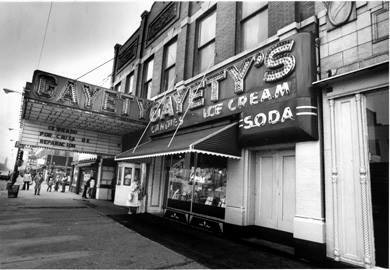 The Gayety Theatre opened in 1908 as a vaudeville and motion picture theatre, later changing over to movies only.

The Gayety Theatre was located on Commerical Avenue, the South Chicago neighborhood’s main retail district. Next door to the theatre was the equally-popular Gayety Soda Shop. The theatre was remodelled in 1937 to the plans of Chicago based architect Lawrence Monberg of architectural firm Monberg & Wagner.

In 1957, the Gayety Theatre switched from first-run features to Spanish-language films, reflecting the change in the populace of the neighborhood from heavily Eastern European to mainly Latino. It was from then on called the Teatro Gayety.

A fire gutted the Teatro Gayety in May of 1982, and the theatre was demolished not long after, replaced by a fast food restaurant.

Was there another Gayety Theater at 82nd & Exchange? I remember walking there with my sisters when we were very young in the mid/late 1960’s. We would go to the Sunday matinee and then stop at the Pepe’s taco stand on the way home. It changed to an all Spanish format in the 70’s. I could swear it was named Gayety’s but I could be wrong.

I remember watching several movies in Spanish with my friends and girlfriends at the Gayety Theater on Commercial Avenue. Mr. Henry Mendoza, whose mother worked there as a cashier, was the manager of my band, The Tellstars, and he got us a gig performing at the theater.

I was sad to see that an arson fire gutted the theater in May 1982, and it was demolished soon thereafter to make way for McDonald’s Theater. The only remaining area theater at that time was the Chelten Theater on South Exchange Avenue, which eventually suffered the same fate.(The Commercial Theater, located one block north of the Gayety Theater, had already been torn down to make way for a mini-mall in 1969.)

Another one burnt up or down I should say.

From the 1950s a postcard view of the Gayety Theatre in Chicago.

What a great candy colored postcard pic. Sign and cartoons are classic.

Just added a Mother’s Day 1949 photo credit and courtesy of Gayety’s Ice Cream Parlor. Via their Facebook page. Now in Lansing Illinois, Gayety’s was originally next door to the Gayety Theatre. I also added another photo of the postcard, that they have hanging on their milk shake machine.

Gayety’s website also has a small photo in a collage. Copy & paste to view.

The end of Gayety’s last shop.