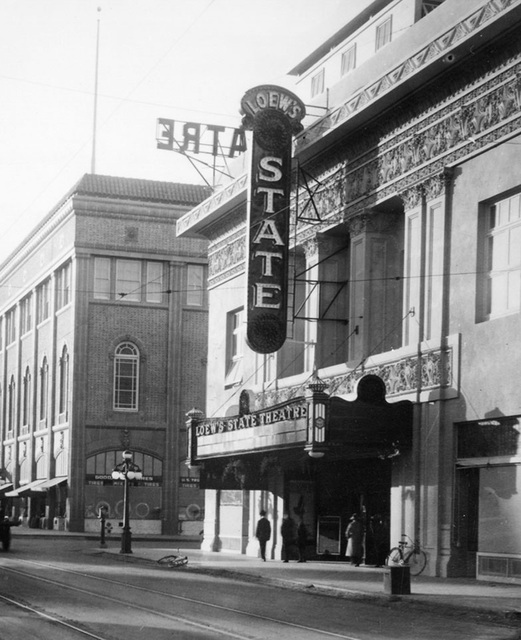 That’s a splendid Sullivanesque building. It’s a rare style for a theater, especially in California. The only other Sullivanesque theater in the state I can think of offhand is the more elaborately decorated Pickwick Theater in San Diego.

I notice that, in the circa 1912 photo, there’s an Orpheum sign on the roof. Issues of the regional entertainment magazine, The Rounder, dated September 30, 1911, October 28, 1911, and November 18, 1911, all have items about Orpheum Vaudeville shows being presented at the Diepenbrock Theatre.

Something to be noted in the circa 1910 photo is that the street has quite a few road apples on it, and there’s not a car in sight. This makes me suspect that the photo (and thus the building) is actually a bit earlier than 1910. The Sullivanesque style of architecture was past its peak of popularity by the end of the 1900s, too, so the building is more likely to have been built earlier in the decade.

The Diepenbrock family have been prominent in Sacramento since the 19th century. There is still a large Sacramento law firm called Diepenbrock Harrison. Given the rarity of this surname in the U.S., it seems quite likely that this theater was erected by an ancestor of the various Diepenbrocks currently on the staff of that firm. I wonder how much they’d charge to tell us something about it? (/lawyer joke)

Once again, a public institution has removed photographs from public view, and the Bancroft Library (University of California, Berkeley) images that lostmemory linked to above are lost in the library’s chaotic, user-hostile web site. I’ve looked, but I can’t find them. Maybe somebody else will have better luck.

“SACRAMENTO, Aug. 24—Fire which was started by an explosion of gas partially destroyed the magnificent Diepenbrock theater, one of the finest on the coast, at 2 o'clock this morning. For more than half an hour the flames threatened to completely raze the $100,000 structure and set fire to the block of dwellings in the immediate vicinity.”This fire must be why the theater’s name changed between 1912 and 1914. I wish the photos lostmemory linked to were still available, so we could see what changes were made in the rebuilding.

I found another source with a 1913 photo of the Diepenbrock Theatre. There is no permalink, so this one will probably vanish, too. The text below the photo says that the building was destroyed by a fire in August, 1927.

The same source has this photo showing the auditorium on opening night in (so the text says) 1911. The image file is shamefully defaced by a Sacramento Public Library digital watermark, even though it is a vintage postcard which is surely long out of copyright. Your tax dollars at work.

The NRHP nomination form for the Lawrence Warehouse in Sacramento lists a number of other buildings designed by its architect, Clarence Cecil Cuff, and the Diepenbrock Theatre was among them.