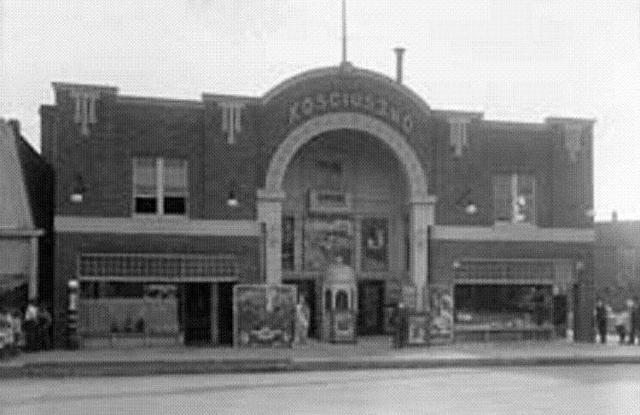 The Kosciuszko (pronounced: kahs-e-ES-co), famed name of the Polish patriot and Revolutionary War hero, 1746-1817), was a modest ‘photoplay parlor’ on Milwaukee’s then heavily Polish south side, so this eponymous honor was no more unusual than that given to the Modjeska theatre ten blocks north.

When it opened in 1915, it had a fully rigged stage for neighborhood vaudeville, often then performed in Polish, as well as the projectors of its day. Its 700 seats were crammed onto a small lot at the intersection of Lincoln Ave. and 14th St. When one looks at the parking lot which occupies the site today and notices the variable black line along the wall of the building to the east, one can see the outline of the roof flashing and tar line where the Kosciuszko met the newer building in 1923.

Even with this remaining proof, it is difficult to imagine how they crammed that auditorium and two small stores into that space! This was strictly a neighborhood enterprise of cheaper design though the two story facade had an attractive arch over the small, domed, island ticket booth and there was some stud lighting on the brown brick and limestone-trimmed front.

There was no pipe organ or decorative lighting which we associate with the movie palaces to come, and there was little in the way of anything decorative at all. The light fixtures were up-lights resembling cauldrons with scalloped lips suspended by four chains each about two feet below the ceiling and were supplemented by smaller fixtures hanging from arms which projected from the plain capitals of the pilasters.

Between the pilasters were simple panels filled with wall covering in a diaper of acanthus scrolls. Below this was a dado of ashlar pattern light and dark squares. Such designs usually had the pilasters mate to box beams crossing the ceiling, but here it was only a cheaper expanse of smooth plaster painted with a broad stripe above the two lines of light fixtures, along with three ventilator grilles.

If the stage had any elaborate drapery, it cannot be seen in the only known photo, and instead we find there the asbestos curtain partially flown into the loft, upon the bottom two feet of which is the inscription: "South Side Wet Wash Laundry" and their phone number. That reveals this to be one of those theatres with an ‘ad curtain,’ anything to bring in a few more dollars in a day when matinees were a hard-found nickel, and the evening shows a precious dime in this blue collar neighborhood.

The player piano accompanied the silent films in its limited way, and those wooden seats - common in that day - were not what we would now call comfortable. At least there was hot air heating which spared one the torment of the ‘radiator seats’ (sitting next to a radiator in winter was a mixed blessing).

They had their own form of ‘air conditioning’: little electric fans on the pilasters. This shows why so many of these older cinemas closed in the summertime; even retrofit air conditioning was too expensive for them once the movie palaces with their designed-in air cooling came into competition.

Lack of summer business was no doubt part of what accounted for the demise of the Kosciuszko, but it was primarily the need of a parking lot for the adjacent furniture store building of 1923, which in 1961 caused its owner to purchase the land under the theater and use it as a warehouse for several years, and then demolish it. This work of local architect Arthur Swager could only remotely be described as ‘Arts&Crafts-style,’ but had not shown films since 1943, so it was no doubt a bargain.

The furniture store owner needed parking space for the ever increasing cars, as well as a space to build a stairway entrance to his new lower level (basement) sales floor, and the city insisted he have another exit from there in order to use the space publicly. This exit is approximately where the east aisle of the Kosciuszko once ran amid the patter of how many children’s feet during the Saturday matinees of long ago.

There is a photo of the theater on this page:
http://bigscreen.execpc.com/history/widen.php