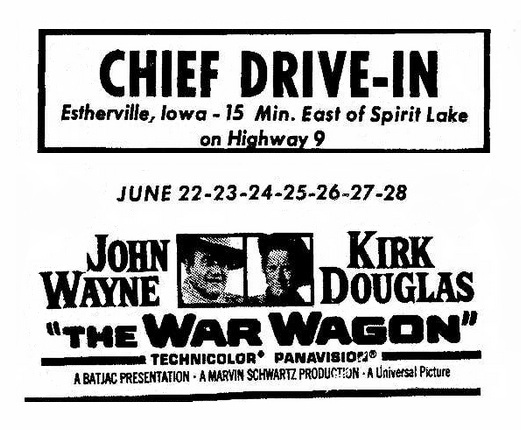 This was on W. Central Avenue just outside of town

Estherville’s entry into drive-in theaters was conceptualized and proposed in 1947 but, the city council unanimously voted against the outdoor theatre as well as a drive-in restaurant to serve both passers by and for theater goers as traffic hazards. But by 1949, a construction permit was authorized and the Hi-Land Drive-In Theatre was built and another permit allowed a nearby and disconnected concession stand. The root beer and fast food stand opened in 1949 but the theater didn’t begin until 1950.

The Hi-Land Drive-In Theatre on Highway 9 scheduled its grand opening on May 12, 1950 with “The Spoilers.” A huge storm destroyed much of the theater just a week before the opening on May 5, 1950 including the attraction / welcome sign and knocking down the hastily constructed 30’ by 40’ canvas screen supported by telephone poles. The 200-space drive-in was owned by three partners in Stan Richey, Lester Larsen and Merlyn Clark of Wallingford had a centralized speaker system. And the concession stand built on Highway 9 was open generally 5p-1a for anyone whether they went to the film. The drive-in theater and restaurant closed for the season on October 2, 1950 with the theater promising a better experience for 1951. But that may have just been too much to consider for the operators.

Veteran exhibitors Charles W. Legg and Robert L. Johnson acquired property to conceive of a more modern drive-in theater concept for Estherville but it would take a couple of years. They would expand to a 340-car capacity as their Chief Drive-In launched on July 9, 1951 with “At War with the Army.” Much as the Hi-Land Drive-In had done, the central speaker concept was used instead of individual speakers. They used an indoor type of theater screen but still supported by telephone poles. There was a low power AM radio concept so that patrons could listen on their car radios. That concept was discontinued at year’s end when the theater installed individual speakers.

On June 23, 1952, a storm blew over the telephone-pole screen which closed the theater for nearly two months but did allow for a real screen to be built anchored in 80 tons of concrete. The 4x8 On the final weekend of its 1952 season, a blaze caused by nitrate cartoons catching fire destroyed the projector building causing $8,000 damage, destroying the projectors and the season’s final feature.

The theater hit is stride during the 1954 calendar year. It expanded to 400 cars and bought new projection equipment to start its 1954 season April 1st with “Battle of Rogue River.” and the screen was enlarged to 92 by 56 feet for the 1955 season to accommodate widescreen formats including CinemaScope. Also in 1954, the theater went into concessions on the premises in a more serious way incorporating a pizza oven as America was just beginning a nationwide pizza boom.

In 1958, the theater bought in-car heaters so that it could operate in colder months on weekends. In 1970, the theater was taken over by Fridley Theatres Circuit along with the downtown Grand Theatre. In 1976 , the managers of the Chief from 1973 to 1976 – Laddie Kozak and his wife – bought the theater from the Fridleys and steered it to its closure in 1978. Thirty years later, the abandoned screen was dismantled and taken to the Superior 71 Drive-in in Spirit Lake, Iowa. Locals inform that the original concession stand still can be found on Highway 9.

A better address is 3665 IA-9 Estherville, IA. You can still see the outline of the drive-in, the ramps and the screen foundation. http://tinyurl.com/pb9hl7n

Just a note to all concerned-The final season for The Chief Drive-In was not 1978;It was 1981 as I was 17 that year and spent many nights out there with my girlfriend and friends!

Now the Elks Lodge of Estherville.

Boxoffice, May 29, 1978: “ESTHERVILLE, IOWA - A windstorm which produced gusts estimated at 70 miles per hour recently toppled the screen tower at the Chief Drive-In. There has been no estimate of the dollar-value of damage at the theatre, which had planned to present the motion picture "Linda Loveland for President” the night the storm occurred."