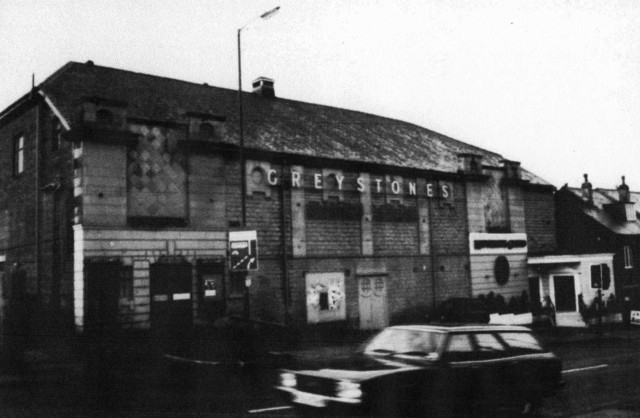 Located in the Greystones district to the southwest of the city. The Greystones Picture Palace opened on 27th July 1914 with the film “A Shot At Midnight”. A brick built building with stone dressings to the façade, which contained the auditorium block running parallel to Ecclesall Road S. The architects were J.P. Earle with Percy J. Roberts. A basement ballroom was opened in October 1914.

The cinema auditorium walls were in cream with an Indian red dado. Curtains were of a deep crimson colour. Seating was for 700, increased to 820 in July 1920 when a new café was opened and the ballroom extended. A BTH sound system was installed in 1930 and the first talkie film screened at the Greystones was “Sunnyside Up” on 14th April 1930. The ballroom also had a maple sprung floor fitted around this time. In 1936 a car park was provided.

Cinemascope was installed in July 1955. A fire closed the cinema for five weeks in August 1956 with most of the damage being to the ballroom. In 1957 a redecoration scheme was carried out under a Friese Green contract and the ballroom had another new floor laid. The cinema never opened on a Sunday. The last films - “A Challenge For Robin Hood” starring Barrie Ingham & “Ringo And His Golden Pistol” starring Mark Damon were screened on Saturday 17th August 1968.

The Greystones Picture Palace then became a bingo hall, with the ballroom converted into a nightclub called ‘Napoleons’. Following a disastrous fire on 27th November 1982, the building was demolished. The Wildcard Sports Bar now operates on the site.