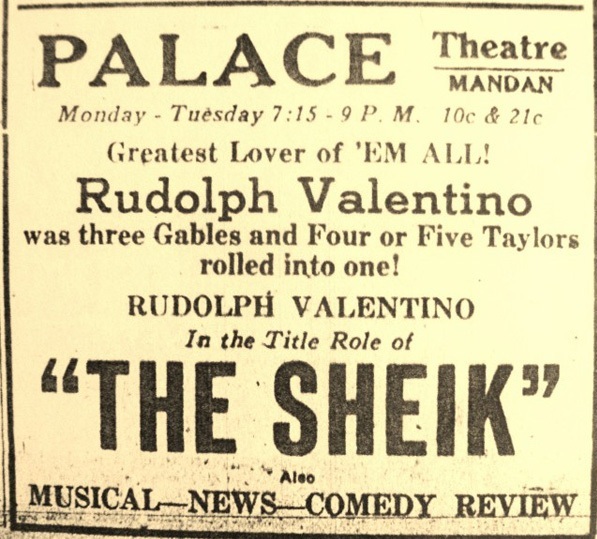 The April 6, 1918, issue of The Moving Picture World mentions Harry Hartman of the Palace Theatre, Mandan, North Dakota, as a recent visitor to Minneapolis. The May 4 issue of the same publication has this item:

“Harry L. Hartman, of the Palace theater, at Mandan, N. D., has boosted the Third Liberty Loan in his city with a specially constructed U-Boat on wheels, operated by a man, pedaling within. The U-Boat made a decided hit in the Loan drive at Mandan and brought some patrons to the Palace as well.”

Those are the earliest mentions by name of the Palace that I’ve found, but it’s likely that the Palace Theatre was the house Hartman was planning to build in the summer of 1916, according to the November 6, 1915, issue of MPW:

“H. L. Hartman, manager of the Grand theater at Mandan, N. D., has purchased the interest of Rex Sanderson in the Grand and Rex theaters and now is sole owner of both houses. Plans for erecting a new theater now will be held in abeyance until next summer.”

The October 7, 1916, issue of MPW indicated that the new theater project was nearing completion:

“Mandan. N. D. — H. L. Hartman has announced that the new Hartman theater here will be ready for the opening about October 15. This theater is said to be one of the finest not only in the Dakotas but in the entire northwest.”

There must have been some delay, judging from this item from the October 21 issue of the journal:

“Mandan. N. D. — The Grand theater has been closed. Shows will be given at the Rex until the new Mandan theater is opened.”

I haven’t yet found the exact opening date of the Palace Theatre, but it was probably open before the end of 1916.

There is modern construction at 106 Third Avenue NW, so the Palace has been demolished. There is a glimpse of the Palace Theatre’s marquee in this photo from the 1920s. The house can be seen in the background again in this 1933 photo

Grand opening was November 17, 1916. It operated with the neighboring confectionery, the Palace of Sweets. It was demolished in March of 1978.