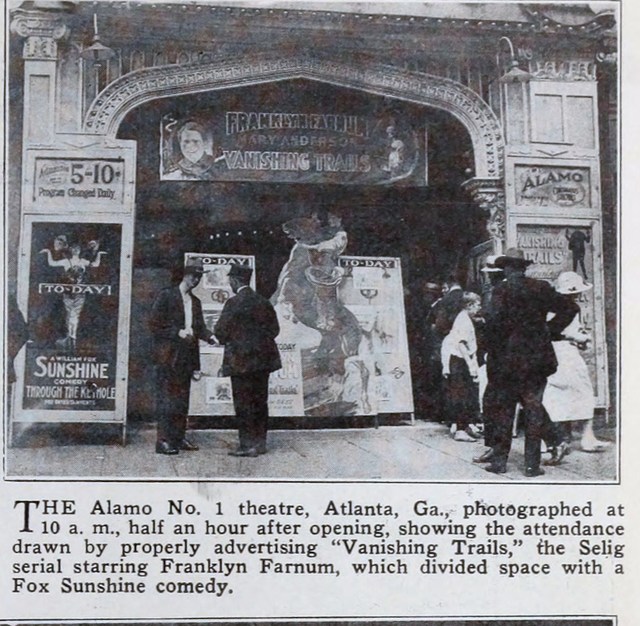 This is one of two Alamo Theatres (the other located on 36 Peachtree Street NW) which operated concurrently in the Atlanta area up until 1939. This Alamo Theatre was listed in the 1914-1915 edition of American Motion Picture Directory as being at 38 Whitehall Street.

Looks like it was demolished a long time ago.

It can be tricky calculating the locations of Atlanta’s theaters from their old addresses. The part of Whitehall Street on which the Alamo Theatre was located was renamed to be part of Peachtree Street at some point.

A 1911 Sanborn Map shows the building at 71 Whitehall Street was an ordinary commercial structure on the west side of the street three doors south of Hunter Street (now Martin Luther King Jr. Drive.) The Alamo Theatre was probably a storefront nickelodeon installed in the space sometime after that year. I believe the building might still be standing at modern address 101 Peachtree Street SW, which is occupied by the Blend Master Barber Shop in the current Google street view, but I’m not positive that it wasn’t under the footprint of the modern brick building extending south from the corner of MLK Drive.