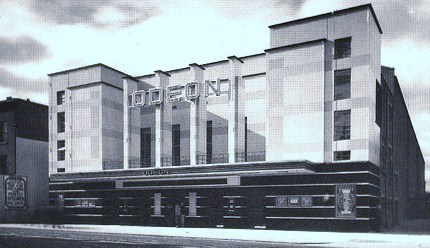 Located in the southeast London district of Peckham. One of the original Oscar Deutsch Odeon Theatres, the Odeon Peckham was built on the site of the Queen’s Hall, later Queen’s Picture Theatre which dated from 1914. It had been purchased by Odeon Theatres Ltd. and was closed at the end of 1937 to be demolished. The new Odeon Theatre was built and it was opened on 1st July 1938 with Max Miller in "Thank Evans".

Designed by architect Andrew Mather, the facade was faced in glass panels in a cream/yellow colour, with horizontal bands of green glazed panels. There was a central recess over the entrance, which had four free standing pillars, that originally supported the Odeon name sign. Inside the auditorium, seating was provided for 1,442 in the stalls and 668 in the circle. The ceiling was stepped and contained hanging light fittings. There were decorative grilles on each side of the proscenium, which had a cove surrounding it, containing concealed lighting.

The four free standing pillars were removed from the facade in the 1960’s. From 27th January 1974, the Odeon was converted into a triple screen cinema, with 668 seats in the former balcony remaining intact, and two screens seating 118 each in the rear stalls under the circle. The front stalls seating area became un-used.

The Odeon was taken over by an independent operator on 1st November 1981 and was re-named Ace Cinema. It was closed on 1st December 1983 with "Videodrome", "Bullshot" and "Lonewolf McQuade", and was demolished in May 1985. An office block was built on the site, which in 2008 contains the Jobcentre.

A set of photographs of the Odeon Peckham, from opening, to demolition here:
View link