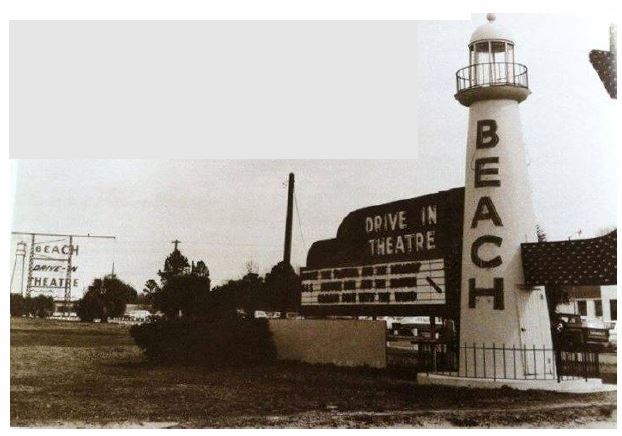 The Beach Drive-In was opened on May 16, 1948 with Dick Powell in “Johnny O'Clock”. I saw “Snows of Kilimanjaro” there in 1952. They had a monthly dusk-to-dawn moviethon with six features for a number of years. In 1969, Hurricane Camille destroyed the screen tower and the Beach was closed for several months. In the early-1970’s, a second screen was added to make it a twin.

Gulf States Theatres operated the drive-in until the mid-1970’s. It was finally closed when the screens were destroyed by Hurricane Eleana on August 27, 1985. A Cajun RV and travel trailer camp now occupies the drive-in site. Its concession and booth building was retained and used for the camp office.

When you use the google map service, you can still see the layout of the Beach Drive In. The projection booth and concession building is visible at the rear of the photo with the travel trailers in the general area of the old ramps, and the 2nd screen layout is also visible in the rear of the lot. Cajun RV Park now occupies the Drive In Theatres former site at 1860 Beach Blvd.

It was Hurricane Eleana in 1985 that finally closed the Beach Drive-In. The storm rolled a shore August 27 at a catagory 2 and flattened the screens. Drive-In business was just too depressed to spend the money to rebuild.

It was a great drive-in but being so close to the Gulf there were nights that the fog was so thick the projector lamp could not reach the screen.

The monthly dusk to dawn in the early 80’s of either horror or sex always found a large crowd til 3:00 in the morning.

A good friend, Johnny Holder was projectionest at the Beach in the 1960’s. I worked with him at the Gulf Theatre in Gulfport, where he worked the morning shift as projectionest. He would leave the Gulf around 4:30 pm every evening, go home for dinner and then to the Beach, until all hours of the morning. I heard a lot of stories about those foggy nights and running the pic into the late nite with no one to be seen in the cars in the lot. He would shorten the reels a lot of nights to get out earlier and said no one ever knew or complained. The dust to dawn programs I refered to was in the 1950’s and they would show six different pictures. I believe the owner then was named Landaiche. I remember him suing the Legion and other first run indoor theatres on the coast to be able to show first run too.

I was just down there last month, and the marquee sign is still being used by the RV park, though upgraded since I took these pictures.