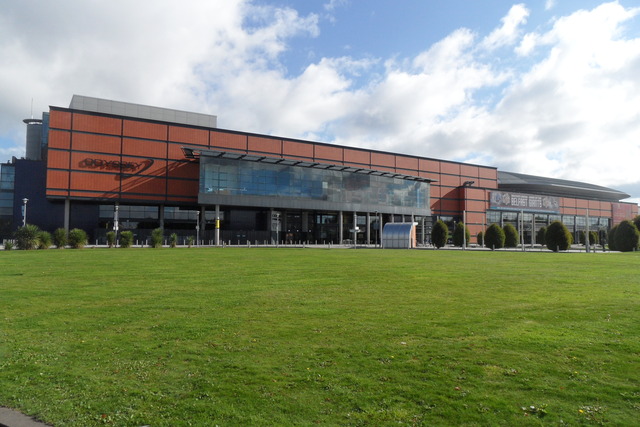 The IMAX opened on 29th November 2001. The screen measures 82 feet high and 62 feet wide. It is equipped to screen regular IMAX films and 3D IMAX films.

The IMAX Cinema is listed as having closed in September 2007.

The developer of the Odyssey Pavilion (part of Northern Ireland’s millennium project) was the Sheridan Group, who earlier had developed Belfast’s first purpose-built multiplex (for MGM at Dublin Road, opened in 1993 – see under Movie House Dublin Road entry on this website). Sheridan subsequently developed the Parnell Centre in Dublin (also for MGM, opened as a Virgin in 1995).

In 1998 the Sheridan IMAX, Ireland’s first IMAX, also opened in the Parnell Centre. It was a short-lived venture and closed in 2000. Undeterred by this set back, Sheridan opened the Sheridan IMAX in the Odyssey Pavilion the following year and slightly later, the Sheridan IMAX at the Bournemouth Waterfront (2002 – 2005).