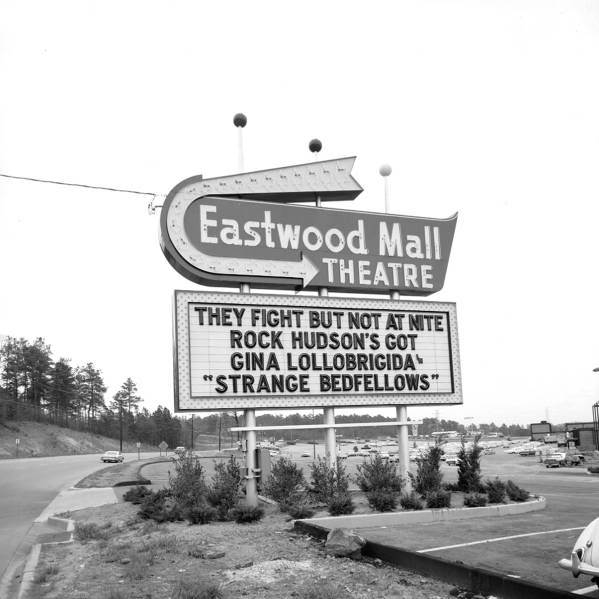 The Eastwood Mall Theatre opened by Newman Waters on December 25, 1964 as a single screen movie theatre. The opening movie was Ann-Margret in “The Pleasure Seekers”. Later operated by Cobb Theatres, it was twinned in the mid-1970’s.

After closing in 1989, it was mostly demolished in the mid-1990’s. The mall was rebuilt, but without a theatre, it was later demolished in 2004.

I can supply a little information for this theatre as I attended it several times while growing up in Birmingham. Eastwood Mall was the first enclosed mall in Birmingham and was located at the extreme eastern edge of Birmingham on US 78 near the Starlight Drive In and the great Golden Rule BBQ.

It was opened by the Cobb Theatre company in the early 60’s, probably around 1964. Although not unusual compared to most other theatres of its era, it marked a major change in Birmingham movie theatre history. Until it opened, 95% of first run movies opened at one of the four major downtown theatres, the Alabama, Ritz, Melba, and Empire. Eastwood was the first suburban first run theatre, and the seating capacity was probably around 600. The style was definitely the 60’s living room look with draped auditorium walls and sofas and chairs in the lobby. The lobby was open air to the Mall itself and at night was secured by a wire gate. The box office was a desk like counter at the entrance to the lobby.

Among the movies I can remember seeing at Eastwood were Sound of Music, Mary Poppins, The Great Race, Khartoum, and The Battle of the Bulge. I am sure that there were others, and a look at that list shows that it booked a lot of prime movies. I remember Sound of Music and Battle of the Bulge were reserved seats. Business was so good here that Cobb soon opened a twin across the road in the new Village East Shopping Center. These were just a couple of ugly shoebox houses and perfect examples of the bland style of 1970’s era theatres. The Eastwood fell victim to the twinning plague that swept the country in those days and was split down the center in the mid 70’s.

As with so many of the early malls around the country, by the late 80’s Eastwood Mall found itself in a shabby state and far outclassed by the newer malls, Brookwood and Galleria. The mall was gutted and the wing that included the theatre was torn down and completely rebuilt, without a movie theatre presence.

The wonderful website, Birmingham Rewound, has a page on Eastwood Mall:
http://www.birminghamrewound.com/EastwoodMall/

View link Click on this link and scroll to the last picture for an overhead view. The theatre is in the lower left and the drive in is in the upper right.

Yes, the Eastwood Mall Theatre was a gem in its day. It is demolished now, but it had already been ruined when it was twinned in the late ‘70s. The twinning eliminated its capability to show Cinerama movies. It had the special projection equipment and curved screen for showing Cinerama movies. I saw 2001: A Space Odyssey and Ice Station Zebra there, plus many more regular formatted movies. If you haven’t seen 2001 in Cinerama format, you’ve not seen 2001. Sadly the entire Mall is now gone, replaced by, yes, another WalMart.

The Birmingham Rewound website has blessed us with this page:

It is the program for the grand opening of the Eastwood Mall Theatre. Among other revelations, it shows that I was wrong in my first comment where I wrote that the theater was opened by Cobb Theaters. It was opened by Newman Waters who operated most of the Birmingham area drive ins including the Starlite Drive In which was located adjacent to the mall. The Waters family was also the developer of Eastwood Mall.

The opening of the theater took place on Christmas Day 1964 at 2PM, and the feature was “The Pleasure Seekers” starring Ann-Margaret.

Circa 1965 image added via Clifford Turner.

This theater opened on Christmas Day 1964, but the first big hit did not arrive until summer 1965. The Sound of Music was the movie that really put this place on the map, making it worthwhile to drive across town to this first, first run theater located away from the downtown area. I saw SOM here on Friday, October 15, 1965. Picture of my ticket stub is in the photo section. The SOM engagement here ran 17 weeks, leaving at Thanksgiving. Not really that long of a run compared to many engagements around the country that lasted up to a year. In Atlanta it played at the Martin Cinerama for 90 weeks.