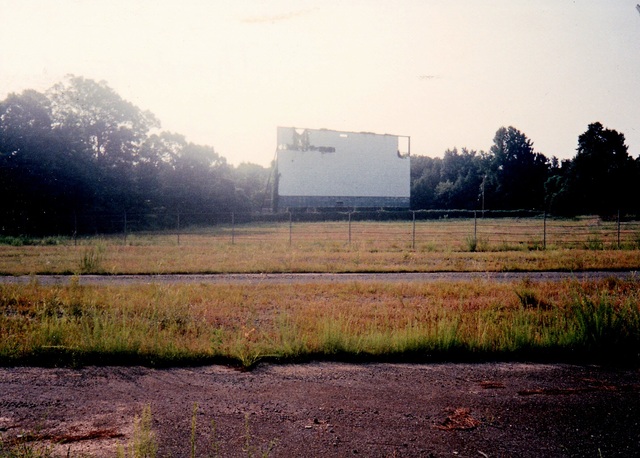 One of Charlotte’s last drive-ins. It was located at N. Tryon Street at Eastway Drive and opened on July 10, 1969 with “The Man From Nowhere” & Doris Day in “Where Were You When the Lights Went Out?” closed in 1986. It had the most elaborate neon sign of all the area drive-ins.

Right after it closed I made a trip to the Thunderbird,Went through the Booth and concession.Projectors were gone and paper was tossed all over the inside,looked like snow. John Mackey a former ABC Plitt theatre manger took me there.I think he said when it closed it was an ABC Southeastern Theatre.Took some pictures,snagged about four car speakers.Later on he gave me a 8 by 10 black and white still of the marquee. “JOURNEY TO THE FAR SIDE OF THE SUN” was the main feature.Have to find the picture to see what the second hit was.Glad Mark got this one CT.

FOUND THE PICTURE, “LEGEND OF BIGFOOT” was top billing with “JOURNEY TO THE FAR SIDE OF THE SUN” second feature.

Working on a project on “Lost” Charlotte Theaters for UNC-Charlotte where i am a faculty member. Would love to get a look at whatever pics you may have. You can send me an email at

The Thunderbird was the first drive-in theater I ever experienced. I was quite young at the time, but I recall seeing some great stuff there like Star Wars and Superman. I only recall ever going to see one other movie (although I’m sure there were others, but I’m pretty confident this was the last) – Firefox with Clint Eastwood. I was around 8 when I saw Superman there, having already seen it once before down the road at Tryon Mall. I remember playing on the swingset down in front of the screen, then getting a little freaked out when the cartoons started on the giant screen right above me (it was Knighty Knight Bugs).

When I was younger, horror films scared me sight-unseen, yet I found myself fascinated with them via magazines and later video stores – I wouldn’t rent them, but I would read all the boxes. In the early 80s, Creepshow played at the Thunderbird. I had read the comic book version at the bookstore, but the thought of seeing the movie scared me. On Eastway Dr, between The Plaza and Tryon, there was a bridge that went over some train tracks. If you looked off in the distance, you could see the Thunderbird’s screen pretty dead on. I remember riding in a car and forcing myself at the bridge to glance over when Creepshow was playing (it would have been a miracle if I could have made out what was on the screen).

I was a weird kid. I love that movie.

Although I’ve been to several other drive-ins over the years, this one has always seemed like the nicest one (rose-tinted memories, I guess).

Mike Rogers, what ever became of this site? retail? Condos? Nothing?

markp, I can answer that. It has become two huge parking lots with retail shops and medical offices.

The Thunderbird Drive-In opened on July 10th, 1969 with “The Man from Nowhere”. Grand opening ad posted.

Also opened with"Where were you when the lights went out?“.