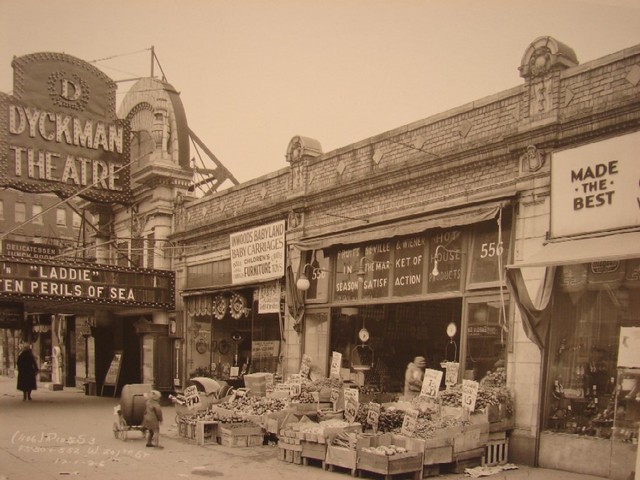 The Dyckman Theatre was located in the northernmost end of Manhattan in an area known as Inwood. It was on West 207th Street off Sherman Avenue and was opened in 1913. It was listed with a seating capacity of 1,700 in 1926.

In 1939 it became part of the Loew’s Inc circuit break as a late release site and may have joined the Loew’s chain at that point. By 1949 Loew’s had stopped advertising it. It was still operating in 1954 when it was featured in a New York Times ad for a wide Easter release of "Heidi" and "White Mane". By August 1962, it was known as the New Dyckman Theatre, and was gutted by fire later in 1962.

Still playing the RKO subrun in 1957.

Still listed in an August 1962 ad for the wide run of “El Cid” as the New Dyckman and no longer operated by Loews.

That’s odd as'El Cid' was released in December 1961. The last movie to play at the Dyckman was ‘That Touch of Mink’ starring Doris Day and Rock Hudson. The film was released on June 14, 1962. I know this because when I was 8 yrs old the theatre was gutted by fire and permanently closed. I distinctly remember the posters for ‘Mink’ survived the fire and sat safely inside their glass casings to the left and right of the entrance to the theatre for several years after that.

Correction ….. Cary Grant not Rock Hudson starred in ‘That Touch of Mink’..

Thanks for the great pictures of this long gone theater.

steveb, since El Cid, athough released in late 1961, was probably presented in an exclusive midtown run for a number of weeks and then reached only an independent theater like the Dyckman many weeks later, the 1962 movie calendar noted above makes sense. The delayed presentation at the Dyckman of “A Touch of Mink” also probably took place well after its initial release date. Thus, when the place burned down, the El Cid run had probably already occurred.

An announcement about the project that would become the Dyckman Theatre appeared in the March 1, 1913, issue of The American Contractor:

The short-lived partnership of architects Frederic Von Beren and Paul B. LaVelle was dissolved in December, 1913.