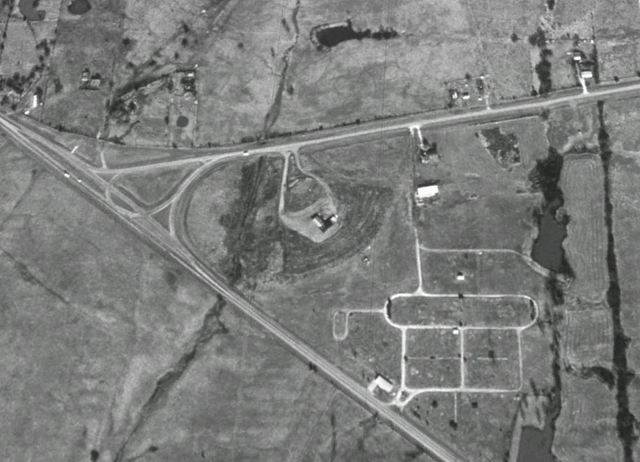 The Airport Drive-In was opened July 13, 1950 by the Interstate Theater Circuit of Dallas five miles south of Paris toward Mount Pleasant on Highway 271. The first movie was “Renegades” with Evelyn Keyes.

Claude Musselman had gotten the Airport Drive-In into the planning stages, but retired before it opened and was replaced by C. W. Moss as city manager for Interstate. Cecil Burch was first manager and the theater was equipped to handle over 500 fans loaded into automobiles.

The Airport Drive-In lasted 24 years going under in 1974. All that remained in 2007 was the old snack bar and marquee, no longer lit up with its Airport name. By 2021, that too had been demolished.

This is the location, out by the airport. The Map link takes you several miles South of town.

This drive-in was located east of Hwy. 271 (Clarksville St.) on Airport Rd.

The site is now a strip club. I believe the clubs sign is the original sign used for the Drive-In.

I follow theatres designed by Jack Corgan, but I’m wondering how this was added – where is the architect mentioned and how do we know?

Information about the Airport goes as follows: The Airport was first operated by C.W. Moss and his Interstate Theatres chain, and was the fifth drive-in to open by the Interstate chain within the past two years with others being in Albuquerque, Tyler, and Abilene. Moss has been part of the Paris area’s Interstate chain since 1941. Moss had started to plan both on the installation and the theater shortly after traveling to Abilene for the opening of the Park Drive-In there in December 1949, although Paris already had the 271 Drive-In three miles north of Paris. The Airport Drive-In though was located a mile-and-a-half southeast of the city. The manager of the Airport was Caviness-native Cecil Burch (who was part of the army shortly before the start of World War II for one year and ten months) and the contractors for the theater were done by the J.R. Spencer Company of Fort Worth, nearly 110 miles away from Paris itself. Construction started four months prior to opening by J. Harvey Elder. On opening, two cartoons were featured on its grand opening day (July 13, 1950) before “Renegades”: Bugs Bunny’s “High Diving Hare” and Tom And Jerry’s “The Little Orphan”.

A couple of those participants are Raymond Willie, a superior of the Valley Theatres Incorporated chain and one of the leaders of the Interstate Theatres chain since the organization in 1918. Prior to his joining, he had been working at Fort Worth’s Hippodrome Theatre in 1916. Living in the metroplex, he was transferred to San Antonio in 1937 where he was charged in every single theater operated by Interstate; and Pat Hudgins, the supervisor of the Interstate chain since 1935, who had been in connection with the Interstate chain in Dallas, Denison, and Tyler.

A July 2022 Google Street View from HWY 271 shows the club has been torn down. There is no building on the property any longer.

However, the marquee still stands and the ramps along with the general outline of the drive-in remain.

Also opened on 13th July 1950 with a Bugs Bunny cartoon(High diving hare) and a Tom and Jerry cartoon(Little orphan).