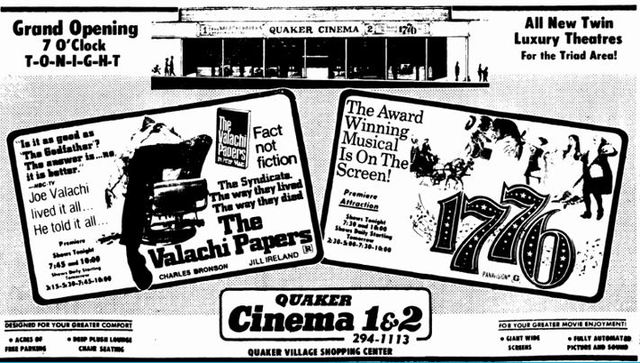 Located at the corner of West Friendly Avenue at Dolly Madison Road, the Quaker Village Theatres was Greensboro’s second twin cinema. The Quaker Village Theatres opened to the public on December 22, 1972 with Charles Bronson in “The Valachi Papaers” in Screen 1 and Ken Howard in “1776” in Screen 2. Both auditoriums equally seated 600. It was once owned and operated by the Stewart and Everett Theatre chain, it was one of two theatres in the Greensboro area that S & E operated.

When Carmike took over operations in 1986, the cinema during the late-1980’s and part of the 1990’s went from screening first-run films to second-run features in order to stay afloat. It remained a discount movie house until its closing in 2003.

After Carmike closed this theatre it was taken over by the owners of the Kernersville Countryside Cinema, who ran the Quaker Cinemas for about three years before closing it for good. Also, Carmike acquired the Quaker and Golden Gate Cinemas in its 1986 takeover of Stewart & Everett, not using their own name in Greensboro ads until the Golden Gate was shut down.

Chuck1231: This information about this theatre will be updated. I have found the original ad for the Quaker Village’s grand opening in the December 22,1972 edition of the Greensboro News and Record. I will have this reposted. The Quaker Village was Greensboro’s second twin cinema after the opening the Janus in 1968.

**This theatre was NEVER operated under Martin Theatres.

From 1992 to 2003 it was run by Gilmore Entertainment. Currently still employed by them. I found old pictures of outside and lobby will download soon

I uploaded the grand opening ad that raysson found here.