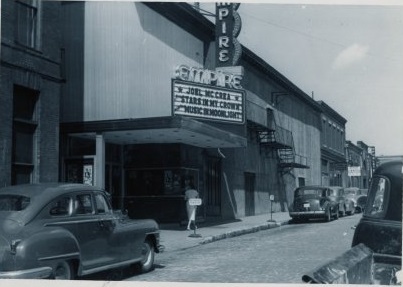 The Empire Theatre opened October 8, 1913, a conversion of former horse stable which became a roller skating rink. It was extended in 1917 to the plans of architectural firm Brown & Berry of Portland. It was still listed in 1955 and was later renamed Paris Cinema. It was demolished in the early-1980’s.

The Empire Theater is long gone.The last name for this theater was the paris cinema.It was torn down around 1981 or 1982.Now where the theater was is a parking lot.

The Theatre Historical Society archive has the MGM Theatre Report for the Empire; it’s Card # 428. But no one filled it out so there is no info, only an undated exterior photo.

There was an old horse stable on Oak Street which was renovated into the Rollaway Rink, a roller-skating rink. The building measured 60 feet X 135 feet. This rink was renovated into the Empire Theatre, which opened on Oct. 8, 1913. It had a small balcony, and possibly a small stage as well. At the time it opened, it was supposedly the only movie theater in Portland which was on the ground floor and not “upstairs”. This info is from a feature article on Portland theaters by the theater historian Donald C. King which appeared in THSA “Marquee” Magazine, 1991- first quarter.

Work had begun on alterations and a 16x50 foot addition to the Empire Theatre in Portland, according to an item the March 10, 1917 issue of The American Contractor. The Portland firm of Brown & Berry had drawn the plans for the project.