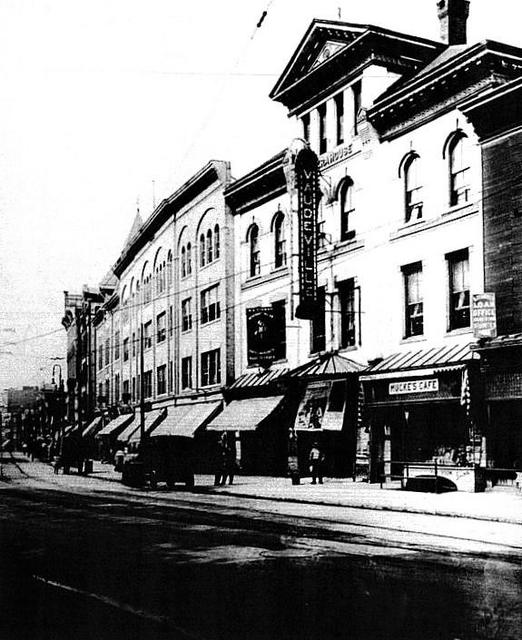 Opened as the New Britain Opera House, the Palace was also known as the Majestic and was the fourth largest theater in the city behind the Strand, Capitol, and Embassy theaters.

The Palace has since been lost.

I am a member of the Hole in the Wall Theater at 116 Main St. Alas, we are not in the space of any prior theater. HITW is a performing arts theater located in a building immediately adjacent to the Andrews Building. The building we are in is a three story office building, with the theater occupying the ground floor. In the late 1800’s a wood frame church sat on this site and interestingly enough vestiges of that structure still are part of the current building. It if makes anyone feel better, the Andrews building has been renovated into office space and a restaurant is moving into the ground floor. Another community organization has purchased the Trinity Methodist church and is preserving the building while converting it to a Performing Arts Center. The RAO building is also being renovated into apartments, so at least in downtown New Britain, once vacant old buildings are being saved and renovated for new uses.Several years ago, the City of New Brtiain renovated the Gates building downtown to house the Board of Education. So, while all the old theaters have gone, there is a renewed attitude about preserving what is left.

There is only one theater listed under New Britain CT in the 1897-98 edition of the Julius Cahn Official Theatrical Guide, the “Russwin Lyceum”. Unfortunately, there are no street addresses in this Guide. The Russwin Lyceum was on the ground floor of its building, had a stage which was 42 feet deep and had 1,138 seats. There was also a Hotel Russwin in New Britain. Curiously, the list of people associated with this theater states that the advertising agent for the Russwin Lyceum is the “manager of Opera House.”

The Palace was north of the center of town on Main Street, not south of town where the Hole in the Wall is now located. It was a big theater, seating over 1200. Toward the end of its life, it succumbed to showing only “adult” movies. It suffered mysterious fire damage in 1979 and was subsequently torn down.

See Embassy Theatre for info on Russwin Lyceum, as they were in same location. Book, Images of America: New Britain, Vol II has photo of both marquees. Anyway, found Palace while doing research on Capitol Lunch (famous sauced hotdogs). I have a photo of North end of Main, looking South toward what is now Rt 72. Palace is on right, Capitol Lunch on left (where New bright Plaza is now). Today it would be somewhere between Webster Bank and Yankee Peddlar and Pawn.

Should have mentioned…Capitol Lunch is now on same side of street as Palace was.

I saw an eBay listing of a ca.1913 postcard showing the New Britain Opera House building with a vertical sign reading Keeney’s. Keeney’s Theatre at New Britain is mentioned in the December 21, 1907, issue of The Billboard as well, so (assuming that Keeney’s didn’t switch locations during the period) this must have been the theater’s name for several years.

The 1899-1900 Cahn Guide lists the house as the Cosmopolitan Opera House, with New Britain Opera House as an AKA.

Many thanks to “lostmemory” for the photo information!

Opera House only showed one opera that I know of. When it was Keeney’s they decided it was Vaudeville shows that made money. This building certainly saw a wide variety of shows and cinema. I hear that the Industrial Museum (of all places) inherited an important piece of the Opera House masonry.

There is an interesting mention of this theatre, and apparently, its Fotoplayer, in the “Music Trade Review” magazine of April 21, 1917 (Volume 64, No. 16, pg. 41). I have transcribed the article below.

Due to the wording of the letter, and the mention, by the author, of an “Empire Theatre” located in “Hartford” (was there really such a theatre, and is it anywhere on the Cinema Treasures website?), I am wondering whether the New York branch office of the American Photo Player Co. made a mistake and possibly sent the wrong letter of praise (from the wrong theatre) for the MTR blurb?

PRAISE FOR THE FOTOPLAYER

The Photo Player Co., of New York, local representative for the American Photo Player Co., recently sold an instrument to Keeney’s Majestic Theatre, New Britain, Conn., and in response to their inquiry regarding the service it is giving, P. S. McMahon, owner of the theatre, wrote the company praising the Fotoplayer as follows: “Answering your inquiry as to the results I have obtained in the Empire Theatre, at Hartford [sic!], since installing the Fotoplayer, I want to frankly admit the results have greatly surprised me. "Prior to installing the Fotoplayer, on June 20, I used a five-piece orchestra and I figured that the saving on the orchestra expense would, within a year’s time, pay for the cost of the instrument.
To my surprise, I want to confess that since installing the Fotoplayer, I not alone have saved my orchestra expense but my business has shown a healthy increase over all of the previous records. "I find that with the use of the Fotoplayer, our music fits the picture and that is something we had not been able to accomplish when we had the orchestra for they would invariably play a tune clear through, then rest, start another tune, followed by another rest. I shall take pleasure in having you refer any theatre owners to me as I will always be glad to say a good word about the Fotoplayer. With best regards, I am, Yours very truly, ”(Signed) Patrick S. McMahon."

Andrew’s Note: according to the TheatreOrgans dot com searchable online database of original organ installations, the Palace (Palmer) Theatre in New Britain had a 3 manual, 8 rank Austin pipe organ, opus 1458, installed in 1926. This organ had a blower serial # of 19066, and it cost $8,950 in 1926. I have no idea what happened to this organ, but I hope it still exists somewhere.

Since the Austin organ company still exists and is still in business, they might have more information, not only on the specifications of this particular organ they built, but also (possibly) some information on the previously-installed American Fotoplayer in this theatre, which could possibly have been traded in to Austin as partial payment for the organ.