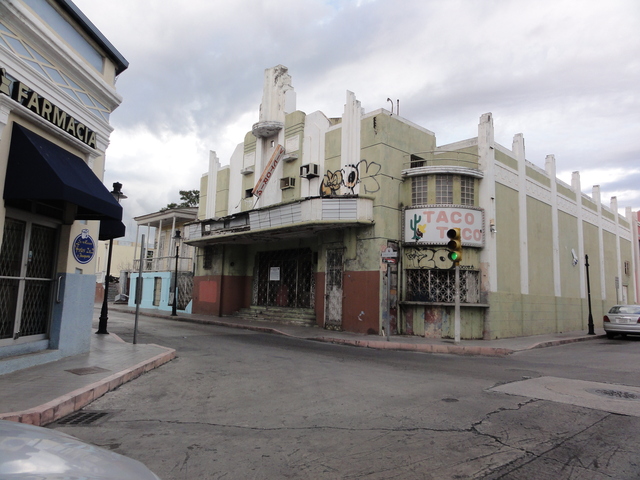 I found this theater while sightseeing in the beautiful city of Ponce in Puerto Rico. It still has a marquee with the name "Victoria" but it clearly looks like it has been closed for years.

It does not appear to have been divided and I was unable to determine an archtitectural style, though the city itself is a feast of architectural varieties.

Any additional information would be greatly appreciated.

This is on the corner of Calle Victoria and Calle Unión.

BTW, someone posted a question about Teatro Victoria in the Teatro Fox Delicias page of this site, referent to a theater on Calle Comercio, also in Ponce. The theater in Calle Comercio was called “Teatro Nacional”. For the sake of rounding up a complete list of all the theaters in Ponce of those bygone 1930s to 1970s years, there were the following other theaters in Ponce before the move to sites near malls: (1) Teatro Fox Delicias, was, of course, on Calle Plaza Munoz Rivera, between Calles Union and Atocha, and I have already mentioned (2)Teatro Victoria, at NE corner of Victoria and Union streets, and (3) Teatro National which was located on Calle Comercio, between Calle Cruz and Belgica’s Calle 3, then there were (4)Teatro Hollywood, on Calle Villa SW corner of Calle Esperanza, (5)Teatro Argel, on Calle Victoria between Calle Distrito and (almost SW corner of) Calle Fogos (6)Teatro Belgica, on Calle Colombia esq. Calle Gran Via, (7)Teatro Rex, on Calle Mayor Cantera esq. Calle del Agua, and (8) Teatro Miramar, at Playa de Ponce on Calle Arias NE corner of Calle Alfonso XII. I cannot confirmed this officially yet, but the historic, and sadly extinct, Teatro Hollywood, was located I believe (unconfirmed) on the NE corner of Calle Mayor Cantera and Calle Isabel. Regards.

Almost forgot: Adding to the list of vintage teathers in Ponce, Number 9 would be Teatro Rivoli, which was located on the SW corner of the intersection of Calle Leon and Calle Sol.

Dragonfly, please add those theaters to the Ponce inventory. I was just thinking that I found it impossible to believe that a city as prosperous and cultured as Ponce could have been home to only e theaters currently posted above. I don’t count the Emperador as this was a newish duplex. Please post all of the information you have as well as that photo of the Victoria. Thanks! Luis

To the Monitoring Admin: The address should read “Calle Union & Calle Victoria”, since it faces Calle Union. Thanks.