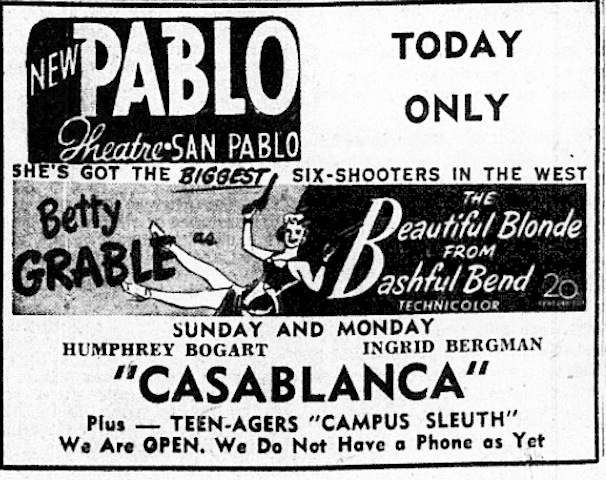 The Pablo had it’s grand opening on July 2, 1943. Popular Republic cowboy star Wild Bill Elliott appeared at the opening in person as well on the screen in “King of Dodge City”. The Pablo was the fifth and final Robert L. Lippert theatre opening in the Richmond area in the previous year and a half. Prior Lippert openings in the area were the Grand, Studio, Times and V (formerly the Point in Point Richmond).

The Pablo changed hands at least twice, in 1949 and 1952. I believe it closed not too long after the final change of ownership in 1952. I vaguely remember reading an article in the Richmond Independent about that time regarding the final owners, a couple from Oregon as I recall, who felt they had been deceived by the previous owners regarding the condition of the theatre and it’s revenue potential. I believe they sued to recover damages.