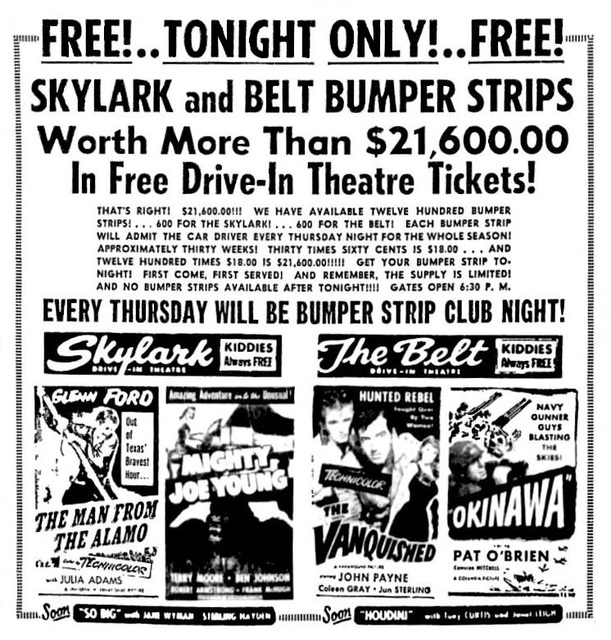 Durwood Theatres was owned by Edward Durwood and his son Stanley H. Durwood, who joined the business in 1945, and became president in 1960. Stanley Durwood is credited with being the first in developing the concept of multiplex theatres in the 1950’s. In 1963, in the Ward Parkway Shopping Center of Kansas City, MO, became the first twin indoor theatre (Parkway Twin) to be opened. In 1969, the Durwood Theatres were reorganized and renamed AMC (American Multi Cinema) to reflect the first multiplex theatre built in 1966. The theatre was owned by Stanley Durwood and was the beginning of the multiplex theatre trend in screening movies in the United States. Richard M. Durwood, who was Stanley’s younger brother and VP of AMC, left in 1976 to start Crown Cinema Corp. in Kansas City, MO. Richard then assumed ownership of the Sky Lark Drive-In and the Belt Drive-In.

In July 1982, a fire started in the freshly painted concession stand. It destroyed the thirty years old concession stand and caused an estimated $30,000.00 worth of damage. The Sky Lark Drive-In did not reopen for the remainder of the 1982 drive-in season, and not for the 1983 drive-in season either. Everett Hughes, who was Crown Cinema director of operations, commented if it did reopen it would be at half of the 600-car capacity. Since the attendances at the Sky Lark Drive-In was on the wane before the fire, it was not profitable anymore to operate it. It was decided in 1984 to demolish the Sky Lark Drive-In and redevelop the property into retail stores and health services offices.

It was owned by Durwood Theatres .they owned several downtown Theatres in St.Joseph.Mo.Admission in the fifties was 50 cents for adults.“WALK THE PROUD LINE"and"SECOND CHANCE” played back-to-back.

Tp..It would great if you could find the picture.

Was it known how the fire statted?