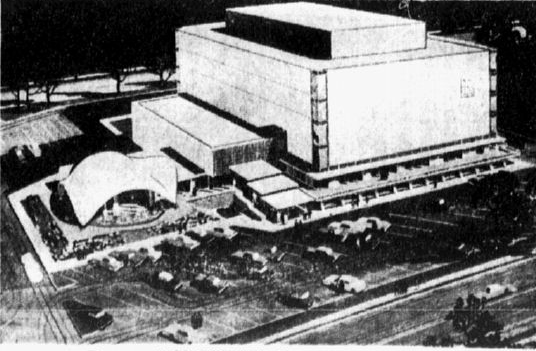 This was the second Maple Theatre on Maple Avenue. It was built in 1945 and opened on April 4, 1946. The building was set back from the street and had a 200 car capacity car park in front of it. In 1959, it switched to live theatre use, and played its final show in June 1960.

The New Maple Theatre was then demolished for an apartment/retail complex.

A movie theater ad from 1949 for the Maple Theater in Dallas.

There were two Maple Theatres. The original house was purchased by K.M. McDaniel and Forrest White in the early 1940s, and three years later they hired Dallas architect Raymond F. Smith to design a new Maple Theatre. Construction of the new house was underway in August, 1945, according to an item in the August 11 issue of Boxoffice Magazine. The new Maple was to have 900 seats (a later issue of the magazine reported 850 seats), and was to be set back from the street to allow room for a 200-car parking lot.

The January 19, 1946, issue of Boxoffice said that McDaniel had been in town to inspect progress on the project, and reported that, barring bad weather, the new theater would be opened that summer.

The March 5, 1938, issue of Boxoffice had said that the original Maple Theatre had been sold to Armbruster & Thompson (the partners from whom McDaniel and White later bought the house) by R.H. Clemmons. Clemmons had owned the Maple only briefly, having bought it from C.J. Stevens who, Boxoffice said, had opened it the previous year.

Aerial photos at Historic Aerials show that the large building now on the site of the second Maple Theatre was there in 1972. The next most recent aerial is from 1956, and the theater and its enormous parking lot are recognizable.

Here is a link to a Dallas Morning News entertainment section display ad from October 10, 1958 featuring the Maple Theater showing a double feature reissue of “Hit the Deck” (1955) & “Red Garters” (1954). For at least a while in the late ‘50’s the theater was advertised as being “The New Maple.”

…well, Chuck, I followed a link posted in an entry in the dhs forum earlier tonite and now THAT’s not working, either. It seems now you have to have a paid subscription.

Anyway, the Maple at 5206 Maple Avenue (they always advertised as “2 blocks east of Inwood) apparently came under management in the late 1950’s that determined showing double-feature reissues was the best course of action. They rarely, if ever, used the clip art provided by the movie companies for newspaper display ads, instead preferring to use art of their own devising, surprisingly effective in setting their ads off from the mass of other movie ads on the page.

The New Maple Theatre was a $125,000 theater plus retail project architected by Raymond F. Smith at 5206 Maple which broke ground in August of 1945. Operated by legendary booker Forrest White of In-Dex Booking Services and M.K. McDaniel, the 850-seat stadium theater’s manager was J.D. Hillhouse who had previously been with the Interstate Circuit. The New Maple launched with private screening of “Two Sisters from Boston on April 4, 1946 just one day after the original Maple Theater also under White and McDaniel had ended its run a block away at 5319 Maple. A public opening was held April 5, 1946 at 5206 Maple with Errol Flynn’s “San Antonio.” But it was the theater’s successful rebranding at the end of its life in the late 1950s and closure in June 1960 for which it is much better known.

The theater operated as a suburban house with double features sometimes advertised with “new” for most of its movie exhibition run into the late 1950s. As the industry was changing toward event films, the Maple soldiered on with double features until the feasibility was no longer possible. Much as the Lawn Theatre in Dallas had done earlier in the decade, the Maple decided to make an arrangement to host live stage plays which was a more lucrative trend in that era. And they hit a winner getting Margo Jones productions and the Maple Theatre Company, as well. The Margo Jones productions turned the sleepy suburban into a lively space.

The New Maple Theatre was becoming so established that the “new” was finally dropped from ads and would be part of a marketplace concept known briefly as Fleetwood Square. The Maple Theater would be incorporated at the central point of the Fleetwood Square’s ambitious expansion. The live theater groups were so emboldened by Edmund G. Peterson’s plan to build a $3 million market center encompassing the Maple at its center that they spent a great deal of time and effort truly converting the movie house to a live stage facility in 1959. But when a competing and similar plan by Trammell Crow was announced for a market center, Peterson and Crow merged their ideas into the Dallas Market Center which was built nearby. But the Maple was bulldozed in favor of an ambitious apartment complex with retail space. The actual position of the theatre was taken by a successful Japanese restaurant. The last production in the new Maple Theater was “Mr. Wonderful” that ended its run June of 1960. The live theater groups would have to find new homes but the Maple Theater’s short life had provided a needed spark to live theater in Dallas that continued onward.

The link to Historic Aerials in my previous comment no longer fetches the Maple Theater’s location. Here is a fresh link. The 1952 view is the clearest.

The address 5206 Maple Avenue is for the first Maple Theatre. The second Maple was at 5139 Maple. That’s the one in the aerial photos.