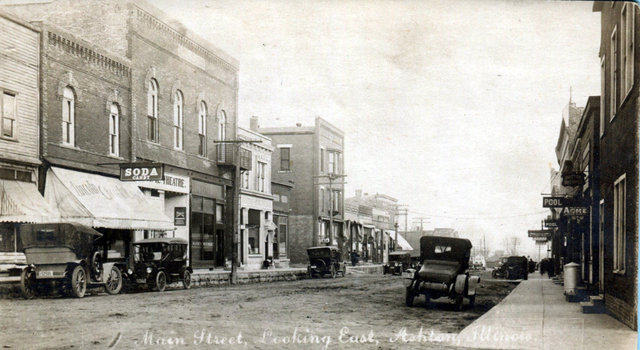 Ralph Erickson bought the Ashton Theater from Clyde Sheppard in 1955.

I’ve posted a photo of an early theatre at 804 Main Street within the 1903 Schuchart Building in Ashton.

I worked at the Ashton theater in 1954. Clyde and Dorothy Sheppard were very good to the student employees. A real fun time in my teenage years. The building of this theater was a HUGE event in Ashton at the time. It is so sad to see it now.

Little did I know in those 1950s that when I’d watch all these movies after work, that I’d someday be an archivist for legendary actress Maureen O'Hara. I started her first official website back in 1991 when the Internet was in its infancy. It became a big success and I even traveled to Ireland in 1998 and more recently was invited to the Governors Awards – Nov 8th, 2014 – in Hollywood when Maureen was honored with a Lifetime Achievement Award. I have two websites – the most active being on Facebook, listed as “Maureen O'Hara Magazine on Facebook.”