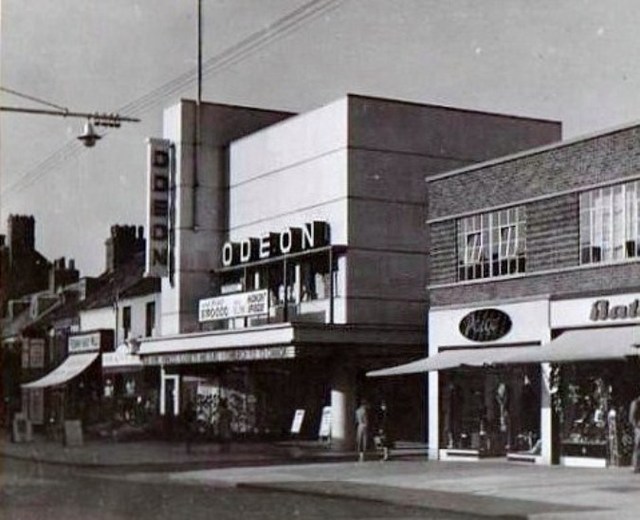 An original Odeon Theatre built for the Oscar Deutch chain of Odeon Theatres Ltd. The Odeon Lowestoft opened on 23rd January 1937 with Roland Young in “The Man Who Could Work Miracles”.

The facade had a box like shape, with square a fin tower on its left side. It was covered in vitrolite panels. Inside the foyer, the upper walls were covered by painted panels by artist Bainbridge Copnall depicting cartoon figures involved in sporting scenes.

Inside the auditorium, seating was provided for 1,262 in the stalls and 606 in the circle. There were troughs in the ceiling containing concealed lighting and there were decorative grilles on the splay walls which had a small bas-relief of a naked female figure on top. On 13th January 1942 a German bombing raid destroyed several buildings directly opposite the Odeon, killing 74 and injuring 124. The facade of the Odeon was badly damaged, and its foyer was used as a casualty centre on that fateful day.

The Odeon was closed on 25th April 1979 with Roger Moore in “Live and Let Die”. Demolished in May 1979 to make way for an uninspiring shopping precinct, which contains a branch of W.H. Smith’s on its site.

The Odeon in Lowestoft was at the time of it’s destruction an unaltered gem from 1937. The building was largely as designed by Andrew Mather - the only inconguity was the modern confectionary/hot dog kiosk added in the 1960’s. The original island box office survived until the end though largely un-used.

When I contributed to this article re the Odeon Lowestoft I have to say that I described the shopping centre that has replaced our odeon as UNinspiring. It could almost be described as an insult to the building that went before…..

When your photo upload system is functioning again I have several pics of Lowestoft Odeon to upload.