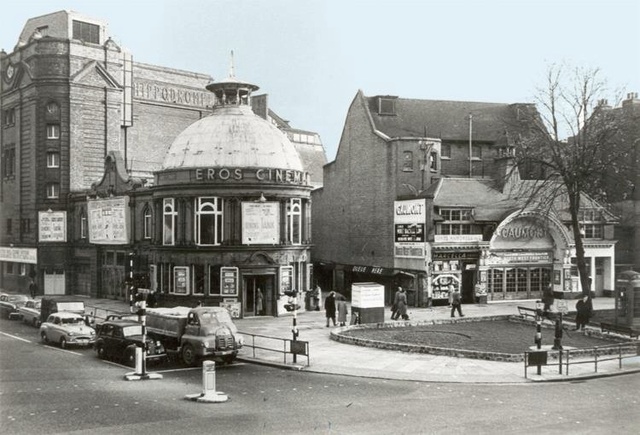 The Queen’s Hall Cinema was opened on 11th December 1913 with Georges Treville in “The Speckled Band”. It was located on Rushey Green, just to the south side of Brownhill Road, in the southeast London district of Catford. It was sited adjacent to the Lewisham Hippodrome Theatre, later known as the Eros Cinema, which was located on the corner of Brownhill Road and Rushey Green (it has its own page on Cinema Treasures).

It was taken over by the independent company Catford Cinemas in 1920. In March 1928 it was taken over by Denman/Gaumont Theatres. Still operating as the Queen’s Hall Cinema, it wasn’t until 5th September 1954, that it was re-named Gaumont.

The Gaumont was closed by the Rank Organisation on 14th November 1959 with Kenneth Moore in "North West Frontier" and "Honeymoon Island". It was demolished in July 1960, together with the adjacent Eros Cinema and an office block named Eros House was built on the site.

The Gaumont, with the adjacent Eros Cinema on the left, photographed in their closing week November 1959:
View link

A vintage photograph of the Queen’s Hall Cinema in 1946:
View link