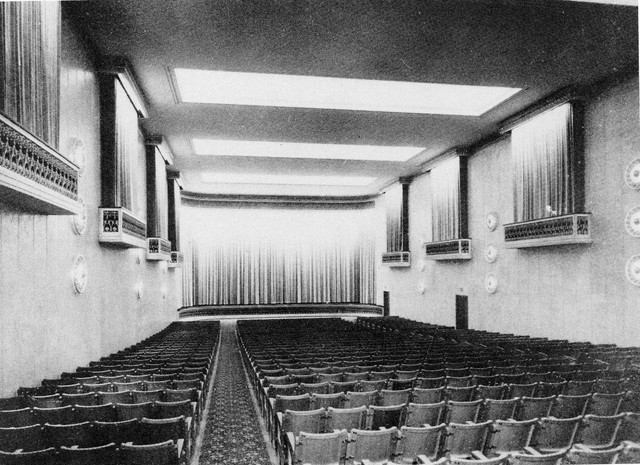 Built within the gutted 3-storey Cox department store in 1964, this 810 seat single level cinema opened on 16th July 1965 with Rock Hudson & Gina Lollobrigida in “Strange Bedfellows”. It had a slow opening with some typical Universal bombs until the opening of "Irma La Douce" in late-1965 placed the cinema as a premiere showcase. Many Columbia ‘Roadshow’ releases saw this venue playing to capacity for many years to follow. Sadly, never equipped for 70mm, but a very impressive ‘scope screen, as well as masking capabilities for standard 1.33:1 ratio.

Despite its central downtown location and popularity, the late Sir Norman Rydge, director of Greater Union Theatres had bequeathed significant funds for the restoration of his favourite theatres; the State Theatre, Sydney and the Forum/Rapallo Theatre in Melbourne. Bound by the terms of Sir Norman’s will, GU had no option other than upgrade the out-of-the-way Forum/Rapallo (not so today) and let the profitable Bercy Cinema be sold. It was closed on 29th September 1983 with Anthony Perkins in “Psycho II”.

Today there is no remaining evidence that the building was ever a cinema, in its current use as a gaming venue and bar named Welcome Stranger.

The last pair of Carbon Arc lamps in the city area (Cinemeccanica Super Zenith 450) went out of use when the cinema closed in 1983. A Dolby CP 50 stereo processor and stereo pick-ups in the projectors were permanently installed for season of “Psycho 2”. The chief projectionist insisted on a high standard of installation. Prior to this the original National 4 channel valve sound system was in use. Magnetic sound replay had its last run with “Best Little Whorehouse in Texas”, which sounded very good in the theatre.

I used to be assistant projectionist here in 1968 showing “Guess Who’s Coming To Dinner?” It was the premiere cinema in Melbourne at the time. Magnetic sound, but glass slides for adverts during the interval, with a great risk of cracking, great memories.

The Welcome Stranger is a hotel, although it may very well have a gaming area and bar.

With respect popcorn-pete The former Bercy had a new second storey installed length wise after closing with a second floor installed to become a world-renowned Chinese restaurant ( The Flower Drum") that still operates. The lower half of the auditorium became a Centrelink office for while before being converted to a popular gaming venue-still operating as a 24hour venue named “Welcome Stranger” Was never a hotel (I assume you meant an accommodation)hotel.

When did tne former Cox Department store open and close? Is the building heritage listed?

There was a ticket seller at this location with a rather enormous hair-do. Very tall.
When the Bercy the lady moved to a similar job at the Greater Union Russel Street. Quite a sight.

Why the name Bercy?

Greater Union Chairmam, Sir Norman Rydge and his wife were keen travellers and consequently new cinemas were named after favourite travel destinations. The Majestic, after major renovations, was named The Chelsea in honour of the Chelsea Flower Show in London. Following the twinning of the State Theatre the name Forum was a tribute to his love of Italy and Rapallo was named after the famous seaside resort in Italy. Bercy was also a favourite resort in France.