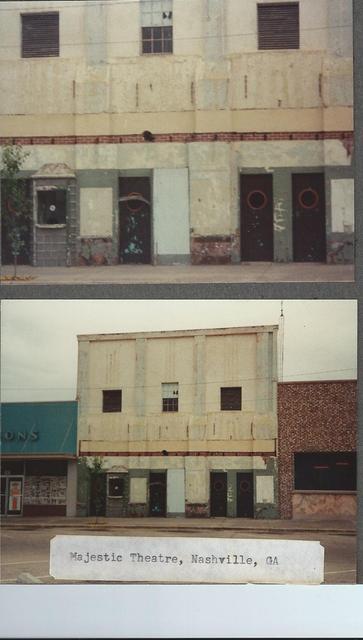 The Majestic Theater dates back to at least 1935. It was operated by Stein Theatres. Still listed in 1955. the date of closure is unknown. The building fell in when it was being demolished.

Here is a photo of Majestic Theatre, Nashville, Georgia, on the Berrien Historical Photos website.

The Majestic was demolished in the 1990s, leaving a big ugly gap on the courthouse square. It was open until at least the mid 1960s.

The building was erected in the 1910s as an opera house, but underwent some extensive remodeling at some point, likely before the 1935 date listed above.

The South Davis Street address is slightly incorrect. The Majestic was on Washington Avenue. Davis Street is two blocks to the west.

The 1965 General Telephone directory lists Majestic Theatre, 105 E. Washington Avenue, phone 686-3611. (I have found Google maps, street view to be approximate at best for many locations)

I just read the above mentioned newsletter, what an out right shame Nashville did not have the foresight to realize what a treasure they had and let it slip away forever. The vintage photos are great and only emphasize what could have been again.