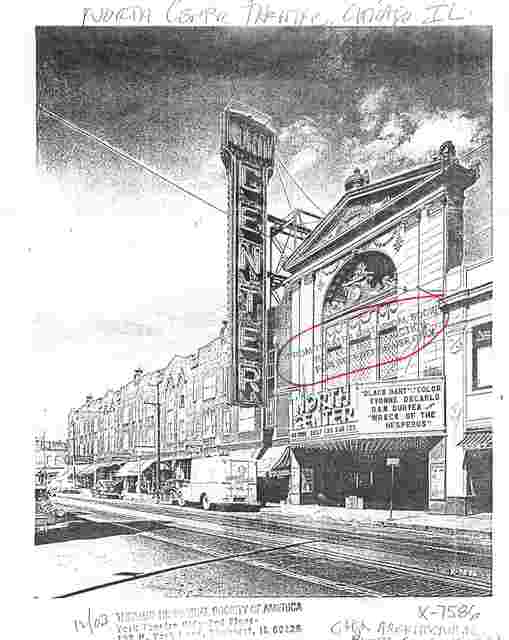 The North Center Theatre was opened February 3, 1926 with Matt Moore in “The First Year” plus variety acts on the stage. It was equipped with a Kimball 3 manual 21 ranks theatre pipe organ which was opened by organist Arthur Qurow. It was closed in 1963.

This is from Boxoffice magazine in May 1941:

CHICAGO-The Essaness Vogue, which has been recently remodeled, had a gala opening Friday. Another Essaness house, the North Center, which has also been remodeled, will have its official opening Thursday.

The grocery store at Lincoln & Belle Plaine was called “Red Owl”, and had a red, black and white owl’s cartoon face as its outside logo. On the west side of Lincoln was the “Childrens Bargain Town” toy store.

In 1925 a Kimball Theater Pipe Organ 3/21 Manuals/Rank (Keyboard/Sets of Pipes) was shipped to this theater.

William Wallace Kimball founded the W.W. Kimball and Company in Chicago in 1857. At certain times in the 19th and 20th centuries it was the largest piano and organ manufactuer. Kimball began assembling REED organs in 1877. The factory produced 15,000 organs a year, as the world’s largest organ maker. They produced 403,390 REED organs. The PIPE organ division built 7,326 models. They also went on to make ELECTRONIC/ELECTRIC organs.

From the photos above the console in 2007, was in a residence in Omaha, Nebraska. Anyone know what happened to the pipes?

The organ itself went to Jim Walgreen and was broken up for parts when he got rid of everything. It was in BAD shape by that point, which is really a shame.

1936 postcard with North Center vertical sign on the left. Enlargeable within link.

An item about the Walter Alschlager’s plans for this house in the November 1, 1924 issue of Moving Picture World said that the building would have an Adamesque façade and the auditorium would be decorated in the Spanish Renaissance style.