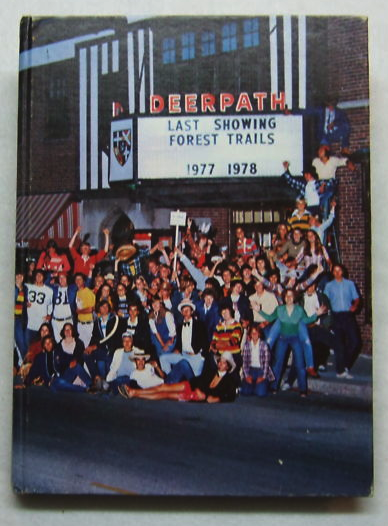 The Deerpath Theatre, in the northern Chicago suburb of Lake Forest, opened September 1, 1928 with Dolores Costello in “Glorious Betsy”. It was designed by the firm of Betts and Holcomb, who were also responsible for designing the Catlow Theatre in Barrington (among several other Chicagoland area theatres).

Both theatres were designed in a neo-Tudor style, though the interior decor differed and the Deerpath Theatre had an Atmospheric style auditorium with a balcony.

The Deerpath Theatre remained open until around 1985. After it closed, it was converted into a shopping center.

It was not a twin. It was remodeled in the very early 80’s and the organ was even restored. It was reopened as the Deerpath 2. Airline seats, private rooms (back of the main floor) good for crying babies, early satellite TV (in the lobby and private rooms), and a rockin Dolby stereo sound system. Pink Floyd The Wall was there right after it reopened. Another cool theater that died due to the Loews / CO multiplex build mania then bankruptcy.

From the early 1900s a photo of the Deerpath Theatre in Lake Forest.

Here’s some additional background information on the Deerpath Theatre. It’s from a 2007 interview with actress Joan Taylor (1929-2012), who passed away on last month – http://en.wikipedia.org/wiki/Joan_Taylor

Q: When did you get the itch to start to perform?

My mom was a dancing teacher, and my dad became the manager of a motion picture theater in Lake Forest, Illinois. It was called the Deerpath Theater — a lot of deer used to go past there down to Lake Michigan. We would go to movies at my dad’s theater on Friday nights, Shirley Temple was on the screen and, whoops, all of a sudden I wanted to do “On the Good Ship Lollipop” [laughs]! My first job was as a cashier in his theater. My mom would never let me wear slacks, but I made $13 my first week as a cashier and of course the first thing I did was buy a pair of beautiful wool slacks for $13. I earned that money, so I could go buy myself what I wanted!”

Q: What did it feel like to be 20 years old and sixth-billed in your first movie?

Felt good [laughs]. It felt really good! Of course, going from stage to movies, you have to [modify your acting]. The same way that boiling water has to be covered with a lid, you’ve got to keep things in; you don’t throw things to the back of the house, so to speak, as an actress on the stage would. I had to learn how to kinda hold things in a little bit. That was hard, coming from the stage. The world premiere was in Topeka, Kansas; I remember going there on a train, playing cards with Dale. At that premiere, there was a parade and there was the mayor and duh-dah duh-dah duh-dah [laughs], because there was Randolph Scott and also Dale Robertson, who became a star after that picture. Again, it was great. Then I went on into Chicago and was met by the newspaper people, and pictures in the newspaper, and all of the Hollywood stuff.

Q: Back in your own home state.

Yes! Then we went into Lake Forest and we had a “premiere” at my dad’s theater—with, of course, pictures of me putting my own name up on my dad’s marquee. “Home Town Girl Makes Good”!

Crisper original image of the year book cover photo added, courtesy of Bob Craig. Via the I Remember Lake Forest When… Facebook page.

The architects for this theater are sometimes given as Stanley
D. Anderson and James H. Ticknor. Betts may have contributed.

Newcomers to Lake Forest and Lake Bluff may be unaware that long ago there was a movie theater located in downtown Lake Forest. People who remember the Deerpath Theater on Deerpath, located just a block west of Walgreens, may not know that in the late 1920s where were two movie theaters in Lake Forest, one in Highwood, and two in Highland Park. If the discerning movie fan couldn’t find a film he or she wanted to see, there was always Waukegan with its magnificent Genesee Theater.

The 1920s was the era where movies ruled the entertainment world. The names of the films changed several times a week, and there was always something new to see. The first movie house in Lake Forest was called The Deluxe. It was situated on Westminster, approximately where the old O’Neil Hardware Store once stood. However, the dominance of the Deluxe was to be challenged in the fall of 1928 when it was announced that a grand movie house would soon be built a few blocks away.

Much publicity was raised about the new project. The architect was Stanley Anderson. In 1928, one of the ads in the Lake Forester discussed the opening of the Deerpath Theater by saying, “It is the intention of the management to set a standard in entertainment that is worthy of the people of Lake Forest and adjacent territory.” The curiosity of the public was fed as the construction of the building continued. One article exclaimed, “The new theater is one of the finest on the North Shore, equipped with every modern facility including a splendid pipe organ.” An organist was hired and touted to be among the finest. These were the days when the ‘talkies’ had not yet become the rule, so it was important for an organist to play as an underline to the on-screen action.

Then on September 1, 1928, the somewhat delayed opening finally took place. The occasion was marked with the filming of the crowds attending the event. Whetting the appetites of the town, the grand opening was preceded with large ads in the Lake Forester. After the first night, a review of the theater said, “Architects are to be congratulated on achieving a theater that lacks the ornate embellishments of the usual movie houses. … The furnishing has been reserved as the theater itself demands.” The featured film for the opening was “Glorious Betsy.” Joseph Emma of Lake Forest was the manager of the theater for nearly all of its existence in town.

The Deluxe fought hard to maintain its place, and urged people to come to the original theater where they would find the best programs, with no increase in prices. Both theaters offered children’s matinees with a weekly serial such as Tarzan and a cartoon. Eventually, the Deluxe closed, and the Deerpath outlived all of its competitors in the surrounding towns. Its doors closed in 1985.

Saw so many movies here it’s impossible to count.

I remember Rocky 3 being a particularly rowdy screening.

Didn’t like seeing Star Wars with a noticeable hole in the screen, but that’s the way it was for a very short while :)

Superman 3 ushered in the $5 ticket price. That was memorable, because up until then it was always $3 and $3.50, with $1.50 matinees. Very affordable for a kid.

I believe Blood Simple was the last film I saw there.

Also, Witness played there close to the end. I’m pretty sure it was playing there in November of 1985. My parents saw it.

The ceiling was incredible, dark blue with painted clouds and stars and all. Really neat. Leaning back and staring up at it, I was always impressed.

Planning for the Deerpath Theatre began nearly three years before it was opened. Here is an item from the November 21, 1925 issue of Exhibitors Trade Review:

The James Anderson Trust, owners of the property, was named for architect Stanley Anderson’s grandfather, a Lake Forest pioneer.