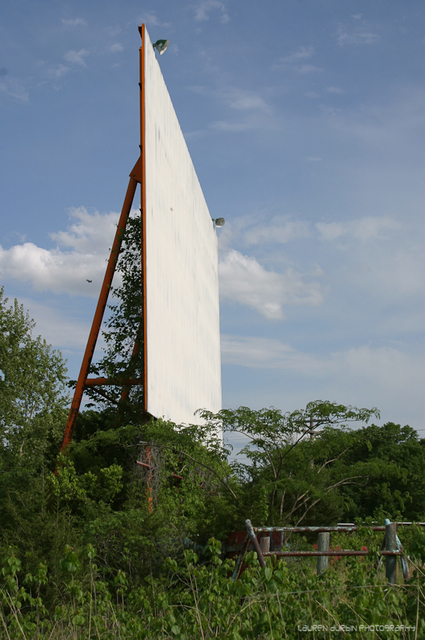 The following text is taken directly from the roadsideoklahoma web site, which also features good photos -
"The Cleveland Drive-In is completely intact behind all the weeds and overgrowth. The screen tower, concession/projection booth, and ticket booth. The weeds are overwhelming, though, including quite a bit of poison ivy." The drive-in has since been demolished.

Yes, only Drive-in I can find is the Cleveland Drive-in owned by John Sanders.

Just for the record, here is what I know about this theatre:

This is from my database on Oklahoma drive in theatres. The fact that there was no newspaper listing means that I had gone to the newspaper archives at the Oklahoma Historical society and looked for any paper, with any listing for the drive in. NONE was found.

A more accurate address for this theater is 2506 E Old Hwy 64, Cleveland, OK 74020. This points to the Indian Electric Cooperative. The entrance road was SE of this on Old Hwy 64. There is no trace left. Source: 1965 historical aerial. Ramps are visible at that time.

BoxOffice used to get chatty, and this note from the March 7, 1960 issue told me more about John Sanders than I might have asked for:

John Sanders plans to reopen his Cleveland Drive-In about May 1. At present he is playing one picture a week in his Melba Theatre, on Friday-Saturday. When he reopens the drive-in, he will close the Melba to a Saturday only, using a film from the airer. He also has a cattle ranch. With all this snow, his feed bill is running into many dollars. His daughter is in high school in Cleveland and his son-in-law is finishing up his course at Oklahoma State University at Stillwater. During school hours, grandpa and grandma Sanders baby-sit with the daughter’s 10-month-old son. They think the grandson is about the finest thing that ever happened to them.