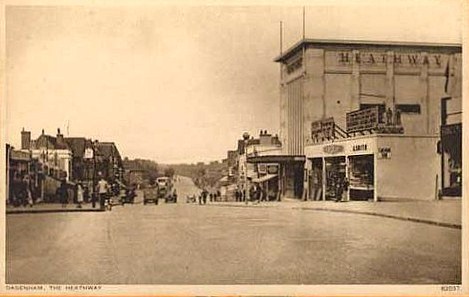 The Heathway Cinema was built for and operated by the Kay Bros. as part of their independent Kessex Cinemas Ltd. chain. It opened on 27th July 1936.

Located in what today is in the east of Greater London, opposite Dagenham Heathway tube station, the Heathway Cinema was a large capacity suburban super cinema, designed by noted cinema architect George Coles, and had seating located in stalls and circle levels.

On 28th February 1943, the Heathway Cinema was taken over by Oscar Deutsch’s Odeon Theatres Ltd. chain. It was re-named Gaumont from 14th November 1949. Becoming part of the Rank Organisation, it was re-named Odeon from 30th May 1964.

The Odeon closed on 20th February 1971 with Ingrid Pitt in "Countess Dracula" and Christopher Lee in "The Devil Rides Out". The building was converted into a B&Q DIY store. It was destroyed by a fire which broke out on the night of 21st July 1983. One year later in July 1984, the remains of the auditorium had been demolished, leaving only the entrance block standing. This too was demolished and the Link Centre, which contains retail units was built on the site.