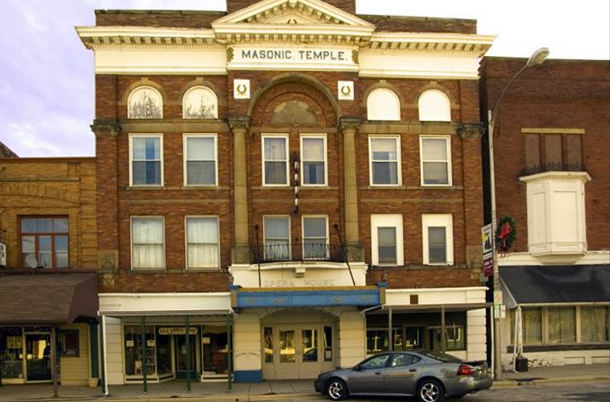 Two items from the Sandusky Star Journal in February 1921, noting the change of town name and some improvements at the Temple:

At the Chamber of Commerce meeting Friday night it was decided that the old signboards bearing the name â€œChicago Junctionâ€ at crossroads and other places along the byways will be torn down and new ones put up bearing the name Willard. It is believed that many tourists have been misdirected by the old signs.

Willardâ€™s Temple Theater now compares favorably with theaters in other cities. Large glass frames have been placed on the outside of the building and the walls of the lobby, giving it a modern appearance.

It is, as a matter of fact. If you are looking for archives relating to the theater in the teens, you need to use Chicago Junction as the town, instead of Willard. Otherwise your search will be fruitless.

Don’t let me keep you up.

According to this site, the town changed its name in 1917. The existing Chicago Opera House saw its patronage diminish when the Temple opened in 1912.
http://userwww.sfsu.edu/~hl/v.html

So if I understand you correctly, what you are saying is that we shouldn’t post any information about a theater’s use for vaudeville or live theater, pre-film exhibition. Is that correct?

That’s good. I did enough arguing with other people today. Point taken.

Volume 13 of the trade journal Ohio Architect and Builder has this item:

R.H. Shively, whose office was in Sandusky, was the architect of the theater.

Thanks for posting some information on The Temple Theatre. I included it in a blog about how, as a reporter for The Willard Times, I was able to go inside the closed theater as the fire department used it for exercises.
It’s at http://www.dennisseeds.com/Blog?p=251