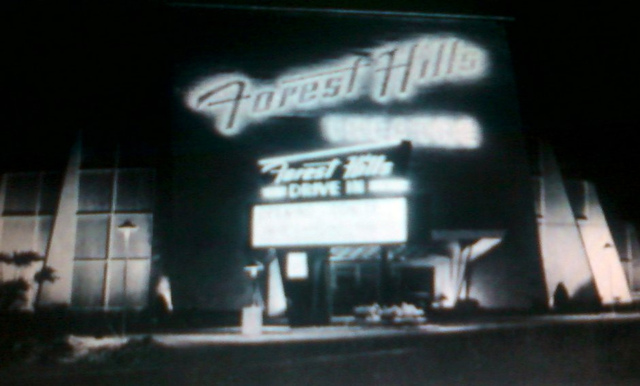 Forest Hills Drive-In was located on Wrightsboro Road and Jackson Road in Augusta. It was built and owned by Donald D. Boardman. It was designed by Boardman-Sargent, who were partners in the business. It opened on April 15, 1953 with Randolph Scott in “The Caribou Trail” & Susan Hayward in “With a Song in My Heart”. It would later become a Georgia Theatre.

It held 600 cars in a nice size lot. The concession stand and booth were painted blue, and poster displays filled the concession area. On April 27, 1963 it ran "Red Hot Wheels" with Clark Gable, and "The Racers". After the 1st feature there was a Four-Tenth Mile 30 Minute Go Kart Endurance Test by popular Augusta Go Kart Racers on the loose treacherous track. They said no one would be admitted between 9:00 - 9:30 PM during the race.

I saw "Gone With The Wind" there but can’t remember any other films. A shopping center was built on a hill above the theatre which was the location of the old Bon-Aire Drive-In. When my mom shopped I would walk over and catch the movie. A projectionist once caught me climbing down the hill and chased me off the lot. I also saw "Midnight Cowboy" one night. My mom had no idea I was watching a then X-rated movie!

By the time "M.A.S.H." closed the drive-in, commercial buildings were creeping into the once rural area. I think the drive-in was a money maker to the end but real estate won out.

William Allen was one of the projectionists. Electrician Ed Newsome helped disconnect the marquee and large sign on the back of the screen. Beautiful neon lighting just tossed away.

There was no write-up in the local paper when this drive-in closed. No pictures exist that I know of. Sure wish I’d snapped a few but when you’re 13 years old you don’t really think past the next day.

I have a March 7, 1953 Augusta Chronicle movie page, and Forest Hills Drive-In isn’t listed so I assume it opened in the mid-to-late-1950’s.

“GUNS OF THE MAGNIFICENT 7” and “BUONA SERA”.

I uploaded an 1964 aerial of this drive-in as well as its neighbour, the Bon-Air DI

This opened on April 15th, 1953. I uploaded the grand opening ad here.

thanks rivest266.The screen stayed Boxed,guess scope flicks shot off into the night.Skyview widen their screen.

Approx. address for this drive-in was 3300 Wrightsboro Road.

thanxs<BROADMAN family in Augusta owns or did own quite a few gas stations, now pumping money into downtown.

Opened with “Cariboo Trail” and “With a song in my heart”.