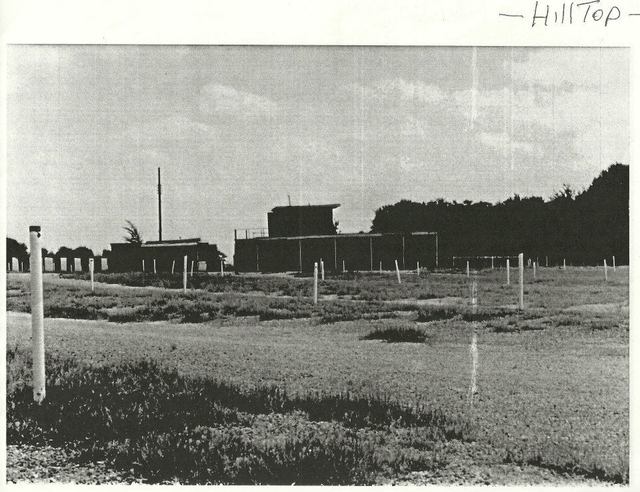 The Hilltop Drive-In was located in North Augusta across the river from downtown. It sat high upon a hill that overlooked downtown Augusta. Of all the drive-ins this one had the best scenic location right on the Savannah River.

It was owned by Holland-Boston Theatres, and would later be sold to Georgia Theatres. It was Augusta’s second largest with 631 parking spaces. Being located by the 5th Street Bridge, as you were going up the hill there was a large neon sign sitting below the drive-in showing the way.

On April 27, 1963 it played "Goliath" with Steve Reeves. Also showing was a cartoon carnival and "Teenage Millionaire" with Jimmy Clanton. I saw the Vincent Price horror movie "Theatre of Blood" there, along with the second feature "For A Few Dollars More". I later took my girlfriend Karen Anderson to see "Star Wars" not that we watched much of the movie. I remember the one drawback watching a movie in summer were the killer mosquitos that ate us up.

The booth was carbon arc, same as the others. Chuck Dray pretty much handled the projection, and he would also fill in at the Imperial Theatre. He would also watch for people sneaking in the back exit. One night a bunch of ushers drove up and changed the marquee to a rather dirty title. Years later we told Dray about it - theatre pranks!

The theatre closed in the late-1970’s. I had a chance to visit afterwards. Georgia Theatres had taken an axe to the booth chopping up everything in sight. I have a picture of the booth/concession stand.

Movies At the HILLTOP!

June 13 1971 another insane booking,“VANISHING POINT” and “CHANGE OF HABIT”.

Someone outta make a book about Drive-in Theatre DOUBLE FEATURES.

The above address will map accurately to the location of the drive-in, which was actually in South Carolina across the river.

Here is a 1971 aerial photo of the drive-in, courtesy of Earth Explorer and USGS.

I thought i had North Augusta on the Header,oh well it is across the river in South Carolina.

Does anyone know exactly when this one closed?

Ithink summer of 78.remembered as mentioned in older posts going there and walking over the old site before it was leveled.Found one old One sheet,“Catlow” and that was it.

Still think all of these should listed under Augusta,too.

thanks.. was a pretty spot over looking downtown Augusta..