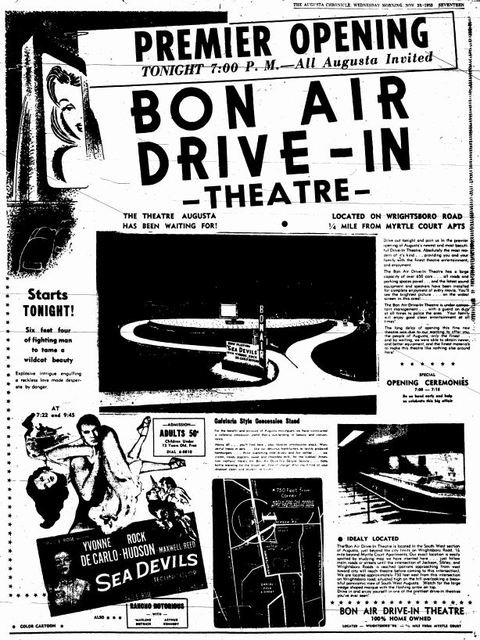 The Bon-Air Drive-In opened on November 25, 1953 with Yvonne De Carlo in “Sea Devils”. In 1956, ten million Americans were going to the movies weekly. In Augusta the Bon-Air Drive-In was packing them in. Located on Wrightsboro Road above the Forest Hills Drive-In, it could almost pass as a twin drive-in.

The screen of the Forest Hills Drive-In was right on Wrightsboro Road while the Bon-Air’s screen was the opposite – towards the woods and way off the road. The Bon-Air Drive-In parked 675 cars and was owned by Harry Dennis. I never saw a movie there but once I did have a chance to walk over to the old concession/booth area. I remember it being built of bricks.

The screen was larger than Forest Hills. In fact when you think about it, Forest Hills Drive-In was newer but was so close to the road that you’d think the Bon-Air Drive-In would have lasted until the 1970’s, but it didn’t.

The Bon-Air Drive-In was a large drive-in parking over 100 cars more than Forest Hills Drive-In. At one time Augusta had more drive-ins than Atlanta! This must’ve been a drive-in theatre town. I believe it was over-screened, and television certainly did not help. At the time Augusta had two television stations.

The Bon-Air Drive-In is long gone. However, you can go to the old shopping center in the location of the drive-in, and if you walk away from the main road to the neighborhood below, you can still see the base of the screen.

I uploaded an aerial photo of this drive-in and the Forest Hills drive-ins.

thanks so much for the great stuff.

first a “MODERN” SHOPPING CENTER was built there in the middle 60’s,Now a WALMART is taking the spot…

yep, dansdrivein theatre.they were at one time a Walmart sits there now.

What was the grand opening date?