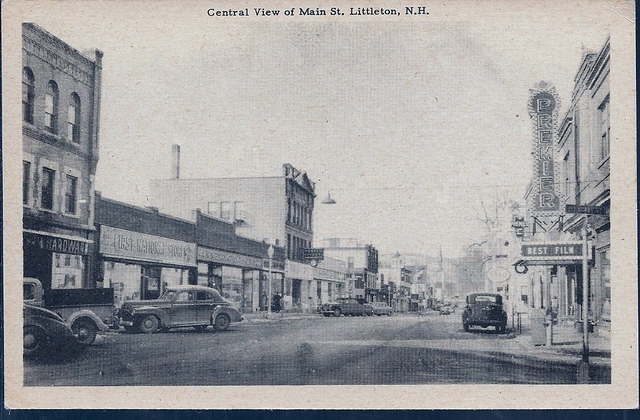 If you’re positive this theatre is in Littleton, N.H., I can definitely confirm that it’s no longer operating. I don’t believe the building is still standing either. Littleton has one movie theatre in town which I’ll submit information about in the very near future.

Update on this theatre: This is a picture of the second Premier theatre which was built on the exact same site as the first Premier in Littleton. The first Premier was built in 1920 and burned to the ground in 1924. The second Premier theatre which is shown above was built in 1941, and in 1949, was also destroyed by fire. The theatre pictured above had 800 seats when built and hosted the world premier of the 1941 Bette Davis film, “The Great Lie”. The event coincided with Bette’s birthday so she attended along with an additional influx of 10,000 tourists. Littleton briefly became the center of attention of all Bette’s fans. When the second Premier theatre burned down in 1949, only a year elapsed before Jack Eames, owner of the two previous Premier theatres, built his 3rd theatre on the same site. It opened in 1951, and was named the Jax Jr. Cinema. It still operates today and I’ll write it up for submission shortly.
The Village Bookstore in Littleton is carrying the new Cinema Treasures' book. So, while you are in Littleton, enjoying the fall folliage, and checking out the Jax Jr Cinema, you’ll also be able to purchase the new Cinema Treasures' Book. So, get going.