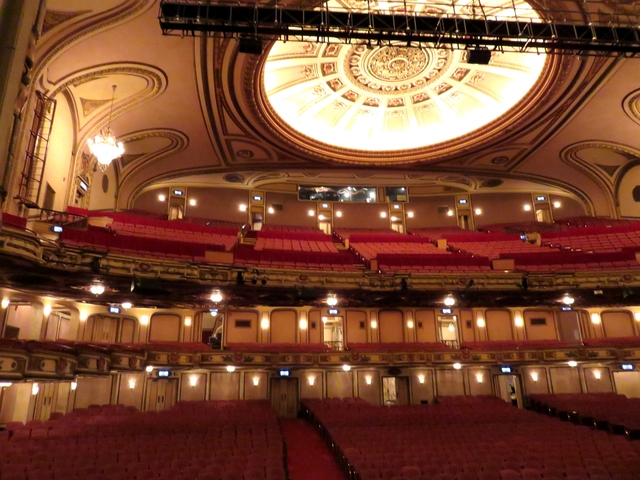 There was already a 1,500-seat Palace Music Hall located at N. Clark Street and W. Randolph Street operated by the Orpheum Circuit which opened on April 1, 1912 and was later renamed the Erlanger Theatre, closing in 1962. Primarly a live theatre, it did screen 3 movies and has its own page on Cinema Treasures.

The New Palace Theatre was opened in October 1926 and was designed by architectural firm Rapp & Rapp. Its interior design is similar in vein to the Los Angeles Theatre - a French Renaissance style beauty inspired by Versailles. The New Palace Theatre was originally opened as the flagship of the Orpheum vaudeville circuit (the State Lake Theatre, also in the Loop, was another one of the Orpheum circuit’s vaudeville palaces in Chicago). After showcasing dozens of big-name stars during the late-1920’s, the theatre was converted into a movie palace in 1931 as the RKO Palace Theatre.

In the 1950’s, attendance began to wane, at what was by then called Eitel’s Palace Theatre and live shows were re-introduced to the repertoire. During the late-1950’s, the Palace was altered to show Cinerama films. On November 12, 1965 it was renamed Bismark Palace. The neighboring Bismarck Hotel purchased the theatre in the 1970’s and it screened its last movie “Nicholas and Alexandra” in 1972. The auditorium was converted into a banquet hall by removing the seats on the orchestra level. In 1984, the theatre, now renamed the Bismarck Theatre, was converted into a concert venue.

Barely used during the 1990’s, the former New Palace Theatre was finally restored and renovated during 1999, and renamed the Cadillac Palace Theatre thanks to a large donation by the car company towards the theatre’s spectacular restoration. The renovated theatre was reopened during the fall of 1999, with the premier of Elton John and Tim Rice’s “Aida”. The renovation has made true the name of the ‘Palace’.

Just found a stage mechanic who was an employee of the Iroquois in 1903 and worked at the Erlanger in 1942. Arthur Marshall. Don’t know if he was at the Iroquois the day of the fire, tho.

Well contrary to the Overview, it turns out the Erlanger Theatre did screen 3 motion pictures in it’s 50 year history. Per the book “Downtown Chicago’s Historic Movie Theatres” By Konrad Schiecke On October 30, 1927 it screened “Wings”, on February 8, 1933 it premiered Noel Coward’s “Cavalcade” and on April 10, 1936 “The Great Ziegfeld”. I have added a CT page for the Erlanger Theatre.

There’s more than that if you go digging. King of Kings, The Life of Emile Zola. I bet you could dig up many more. It was set up as a road show house. That’s a significant part of theater history and fits the site’s criteria.

It was the book’s author who concluded only the three. Which I found on a search after a friend found print ads for two of them. If there are more, it’s probably more than the Blackstone had, and it got added to CT. Erlanger hasn’t been added yet. But I credited about 5 people since I used bits from everywhere. We’ll see…

Erlanger page is up. Searching for a suitable Overview photo, before I post the print ads.

The Stifel Theater (Kiel Opera House) in St Louis just screened The Brain there in October for Mystery Science Theater 3000. Does that mean it is now a “Cinema Treasure”?

I was surprised that RKO operated theaters in Chicago. I thought B&K, always controlled the Chicago market. Does anyone know when and why major companies like RKO, Loews, Warners, Fox and Paramount didn’t have operations in Chicago?

Fox did for a while in the late 20s, acquired many Ascher Bros theatres. Warners controlled the Cooney Brothers circuit. B&K were part of Paramount. So they were mostly present, B&K just controlled the big downtown theatres and many neighborhood ones.