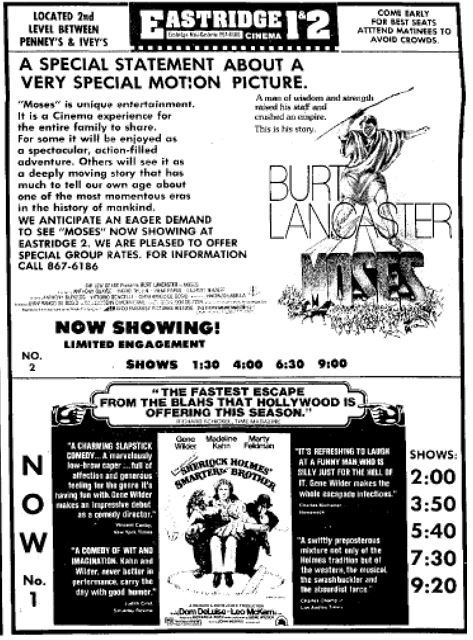 Located in the Eastridge Mall, the Eastridge Theatres opened on March 12, 1976 as a twin cinema with the showings of Gene Wilder in "Sherlock Holmes' Smarter Brother",and the exclusive enagement showing of "Moses" starring Burt Lancaster. The theatre was located on the second level of the shopping center that was between J.C Penney’s Department Store and near Ivey’s Department Store.

The theatre was owned and operated under the Martin Theatres chain which by the way operated a lot of theatres here in North Carolina. From 1976 until 1982, it remained a twin cinema until 1982 when one of the original auditoriums was split down the middle adding on a third screen, making it a triple.

Acquired by Carmike Cinemas in the mid-1980’s, the second auditorium was also split in two, added on fourth screen, making it a multiplex, which by the late-1980’s, the Eastridge became a four-screen cinema until its closing in 1998.