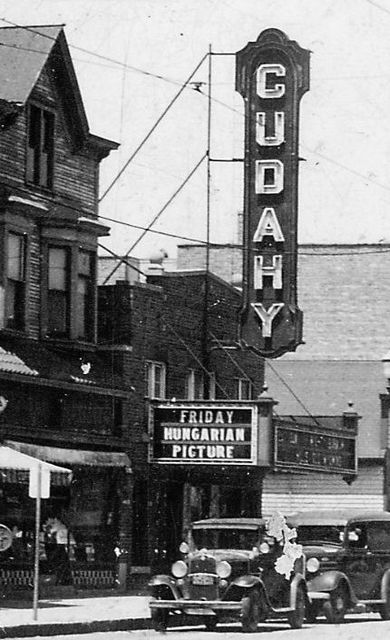 One of the Milwaukee south-suburban area’s oldest theatres, the Cudahy Theatre was located on S. Packard Avenue at E. Barnard Avenue.

The Cudahy Theatre opened in 1914, built by Andrew Gilbert, who sold it in 1928 to Martin Grimm of neighboring South Milwaukee. After operating the theatre for a number of years, Grimm sold it to Raymond and Oliver Trampe, operating as Cudahy Theatres.

Operating into the early-1960’s, it was razed in mid-August 1964, at the request of the city’s then mayor Lawrence Kelly. The site now contains an office building.

(BOXOFFICE, July 24, 1967)
Larry Kelly, who formerly operated the Majestic and Cudahy theatres in suburban Cudahy and who is mayor of Cudahy, thought he had “troubles” as an exhibitor. Cudahy’s assessor is conducting the first complete reassessment of residential properties in the suburb’s history. Some of the aldermen admitted that when he first arrived they thought he “was a nice guy, the kind that won’t rock the boat.” They continued to think the assessor was a nice guy until they found out what he had been doing. Now, all they can do is await the forthcoming tax bill for the bad news. Kelly agreed that a reassessment was overdue. However, he is worried about the effect on people with fixed incomes.