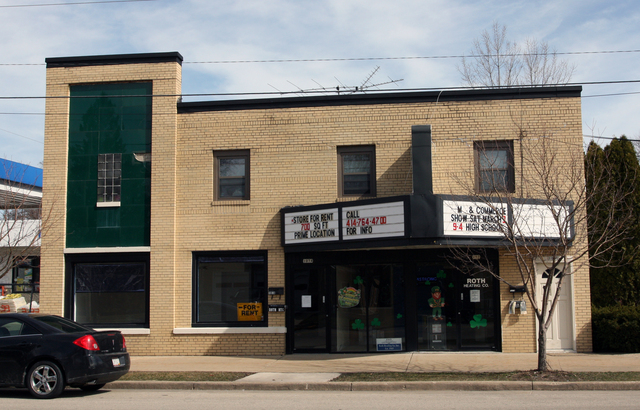 Opened in 1948, the former Ford Theatre was closed as an adult theatre on December 1, 1985 with “The Maxi” & “Lucious Lolita”. It is now home to a heating business. The marquee is still in place.

WATERFORDâ€" Patrons of the Ford Theater in Waterford were chased out into the cold Sunday night when the popcorn machine in the movie house caught fire. The Waterford Fire Department put out the blaze which caused an estimated $1,000 smoke and fire damage to the machine and plaster in the lobby. The patrons, undaunted, trooped back into the theater to see the rest of the film after waiting outside for 20 minutes. Firemen said the fire was caused by a short circuit in the machine.

(RACINE JOURNAL-TIMES, May 20, 1948)
The foundation for the new Ford Theater, being built for Gust Jahrike (?) and son, is nearing completion.

June 28, 1949: Mr. and Mrs. Ronald Jahnke were given a farewell party at Fox Isle Saturday evening. The Jahnkes recently sold the Ford Theater to Joe Baisch of Milwaukee and will leave next month for the west.

Racine Journal Times, January 6, 1971 – Waterford Lions Club Will Operate Theater …. WATERFORD — A desire to establish a good family entertainment center was the motivation behind the Waterford Lions Club decision to purchase the community’s Ford Theatre, Harold Robinson, spokesman for the club said. “The community deserves a place where the entire family can go to see a movie without embarrassment,” he said. The purchase was completed in November, when the agreement was signed by the club and the Morbak Corp. of Waterford, former owners of the property. The theater was closed for two weeks before the Lions Club purchased it. The theater has been leased to Lawrence Heebsh of Waterford, who has connections with a film booking agency which specializes predominantly in family movies, Robinson said. Movies are shown now on Friday, Saturday and Sunday nights and Heebsh has plans to add Sunday matinees to the program beginning about Jan. 17, Robinson added. The building also will be used as a meeting place by the Waterford Leos Club, a young people’s group affiliated with the Lions Club, he added. The building is being renovated with this purpose in mind, he said.

Racine Journal Times, March 13, 1948: Gust Jahnke and son of Wauwatosa have purchased a tract of land in Abor (?) subdivision near the Shell filling station. They plan to erect a theater.

February 1, 1988: Brothers plan to clean up theater’s act (by Jim Kneiszel, Burlington Bureau) WATERFORD - The first thing the Elliott brothers are going to do is change the name of the infamous Ford Theater. Ed, 23, and Jeff, 18, originally of West Bend, have taken a semester off from college to try and save the theater with a controversial history fronTlhe fate of being turned into a truck garage. The Ford Theater, 107 N. Milwaukee Ave., was known far and wide as a porno movie house until it closed in late 1985. For 12 years, church groups and residents protested the showing of X-rated films in their community. The Elliotts, who have taken a year’s lease with an option to buy the theater, are going to change the name on the marquee to “The Bijou,” or something else with a cinema ring to it, so people don’t associate the 400-seat theater with X-rated films. When the Elliots took over the theater two weeks ago, they announced under the marquee that they were going to show G, PG, and R rated films. In 1973, the Waterford Lion’s Club leased the empty Ford theater to two young brothers, Jim and Tom Younk, who began running family-oriented films alternately with X-rated movies. The Eliotts say they want residents to forget the seedy past of the Ford, and support their standard movie fare. They’re out to give high school students a place to go to keep them off the streets, and give area residents an alternative to driving to Burlington’s Plaza theater or to Milwaukee for a night at the movies. “We’ll do what we can, offer a decent place to come, but if the community doesn’t support their movie house, they’ll probably lose the theater permanently,” Ed Elliott said. He referred to recent attempts by local businessmen to buy the theater for a garage. “They got rid of their X-rated theater. Now they’ve supposedly got what they wanted and we need their help,” Ed said. The pair hope to draw from an estimated 15,000 people within a ten-mile radius of Waterford with prices that are higher than at one of Milwaukee’s budget theaters, but lower than the $3.50 offered at the Burlington theater. They intend to carry first-run films for a week at a timey, usually a couple of weeks after they’ve opened in the Milwaukee market. “We want people to know that we’re not just young and here to make a killing. We’re here for the people,” Jeff said. Jeff did admit that the brothers don’t look like they’re ready to take over a theater. “People come in here expecting someone in a suit. When they see two kids in work clothes, they don’t take us seriously,” Jeff said. Jeff is interested in filmmaking and wants to eventually enroll at the University of California, Los Angeles, in the film program. Ed, a University of Wisconsin-Milwaukee student, wants to transfer eventually to an east coast school for business study. They plan to renovate the theater, open in about eight weeks, and give the project six or seven months to show a successful profit. In order to get a loan to buy the building, listed at $89,000, the two must show a good profit over the year-long lease, Ed said. The theater was for sale for over two years before the pair’s lease agreement with former theater operator, Jim Younk. Younk had closed the theater in 1985 when X-rated videotapes gained popularity and theater attendance dropped. The theater was a mess when the Elliotts started exploring the cement block building two weeks ago. It was musty, smelled moldy, and still contained evidence of the porno film days; every room had red light bulbs hanging from the ceiling, and there were snippets of X-rated movies on reels and X-rated movie literature. A $30,000 renovation underway includes remodeling the lobby and doing a makeover inside the theater. The Elliotts are purchasing 300 new theater seats, new projection equipment, new carpeting for the aisles, a new screen capable of showing three-dimensional films, stereo sound equipment, and pleated acoustic fabric for the theater walls. If the project isn’t a success, the brothers said they could resell most of the new equipment to cut losses. They realize the movie business in Waterford is risky, but they consider this a learning experience. But for now, it’s just a lot of clean-up work for the Elliotts, who have taken up residence on the second floor during the remodeling. They will spend the next several weeks helping with the remodeling and having an artist friend paint murals of movie stars around the outside of the theater building.