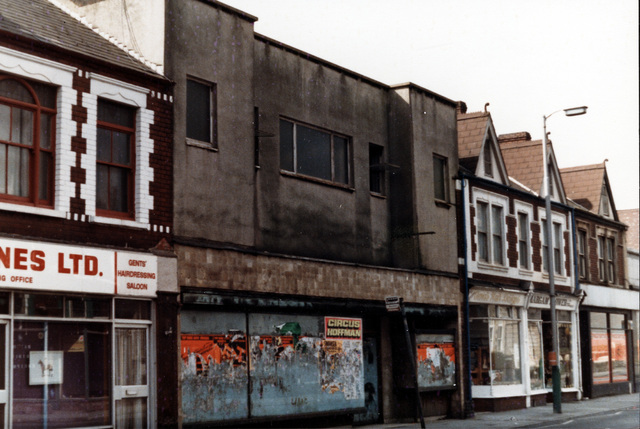 A small second run cinema located in the Port Talbot suburb of Taibach.

It was a conversion of a building owned by the Co-Operative Society which housed a dancing academy on the ground floor and a billiards saloon upstairs on the first floor. The Regent Cinema opened on 26th October 1936 by an independent operator. It was a rather plain building.

It was taken over by the Oscar Deutsch chain of Odeon Theatres Ltd. on 13th December 1943, but retained its ‘Regent’ name.

It was said to have been renovated in 1952, and the Regent Cinema was closed on 27th October 1956, having never been fitted with CinemaScope. The building became a Co-Op grocery store. By 1994, it had been converted into a Body Shape health studio & gymnasium, renamed Ware-House by 2014.

The venue was built in 1900 for the Co-Operative Society as a hall and it is said that the first films shown in Port Talbot were shown in the hall in its early days. Later it went to become a Dance Academy and Billiards hall. Purchased (or Leased) in 1936, after some rebuilding work it re-opened as the Regent Cinema. It seems to have closed again in Spring 1937 asnd re-opened once more in May of that year (reason not known). It is said to have had quite a nice facade but internally was rather plain and functional with 700 seats. Sound was provided by Western Electric sound.
Odeon pictures became involved (Perhaps on a management basis) but it only became an Odeon Associated Theatre in 1943. The only sign of this was a large letter ‘O’ outside, apparently because the lease prevented the name ‘Odeon’ from appearing.
In June 1945 control passed to Circuits Management Ltd, as did all Odeons. Prices were 9d to 2/3d in 1937 and rose to 1/– to 2/4d in 1951. Cinemascope was never fitted so with the decline in films for the normal format it was inevitable that it would close, which it did on the 27th October 1956. It was taken over by the Co-Operative Society, which poses the question was it always on lease from them?